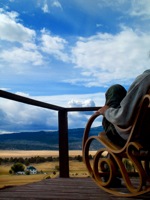 French - action of withdrawing or falling back to somewhere, action of receding

b : withdrawal from one's position or occupation or from active working life
c : the age at which one normally retires <reaches retirement in May>

For lessons on the topic of Retirement, follow this link.

Retirement is the point where a person stops employment completely. A person may also semi-retire by reducing work hours.

Many people choose to retire when they are eligible for private or public pension benefits, although some are forced to retire when physical conditions don't allow the person to work any more (by illness or accident) or as a result of legislation concerning their position. In most countries, the idea of retirement is of recent origin, being introduced during the 19th and 20th centuries. Previously, low life expectancy and the absence of pension arrangements meant that most workers continued to work until death. Germany was the first country to introduce retirement in the 1880s.

Nowadays most developed countries have systems to provide pensions on retirement in old age, which may be sponsored by employers and/or the state. In many poorer countries, support for the old is still mainly provided through the family. Today, retirement with a pension is considered a right of the worker in many societies, and hard ideological, social, cultural and political battles have been fought over whether this is a right. In many western countries this right is mentioned in national constitutions.