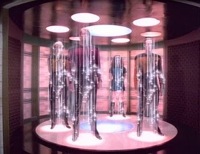 The process whereby beings whose sub-spirit status requires the assistance of transport angels to accomplish travel through space.

When celestial beings are to be enseraphimed for transfer from one world to another, they are brought to the headquarters of the sphere and, after due registry, are inducted into the transit sleep. Meantime, the transport seraphim moves into a horizontal position immediately above the universe energy pole of the planet. While the energy shields are wide open, the sleeping personality is skillfully deposited, by the officiating seraphic assistants, directly on top of the transport angel. Then both the upper and lower pairs of shields are carefully closed and adjusted.

And now, under the influence of the transformers and the transmitters, a strange metamorphosis begins as the seraphim is made ready to swing into the energy currents of the universe circuits. To outward appearance the seraphim grows pointed at both extremities and becomes so enshrouded in a queer light of amber hue that very soon it is impossible to distinguish the enseraphimed personality. When all is in readiness for departure, the chief of transport makes the proper inspection of the carriage of life, carries out the routine tests to ascertain whether or not the angel is properly encircuited, and then announces that the traveler is properly enseraphimed, that the energies are adjusted, that the angel is insulated, and that everything is in readiness for the departing flash. The mechanical controllers, two of them, next take their positions. By this time the transport seraphim has become an almost transparent, vibrating, torpedo-shaped outline of glistening luminosity. Now the transport dispatcher of the realm summons the auxiliary batteries of the living energy transmitters, usually one thousand in number; as he announces the destination of the transport, he reaches out and touches the near point of the seraphic carriage, which shoots forward with lightning-like speed, leaving a trail of celestial luminosity as far as the planetary atmospheric investment extends. In less than ten minutes the marvelous spectacle will be lost even to reinforced seraphic vision.

The fifth group of supervisor seraphim operate as personality transporters, carrying beings to and from the headquarters of the constellations. Such transport seraphim, while in flight from one sphere to another, are fully conscious of their velocity, direction, and astronomic whereabouts. They are not traversing space as would an inanimate projectile. They may pass near one another during space flight without the least danger of collision. They are fully able to vary speed of progression and to alter direction of flight, even to change destinations if their directors should so instruct them at any space junction of the universe intelligence circuits.

These transit personalities are so organized that they can simultaneously utilize all three of the universally distributed lines of energy, each having a clear space velocity of 186,280 miles per second. These transporters are thus able to superimpose velocity of energy upon velocity of power until they attain an average speed on their long journeys varying anywhere from 555,000 to almost 559,000 of your miles per second of your time. The velocity is affected by the mass and proximity of neighboring matter and by the strength and direction of the near-by main circuits of universe power. There are numerous types of beings, similar to the seraphim, who are able to traverse space, and who also are able to transport other beings who have been properly prepared. 39:3.8-9