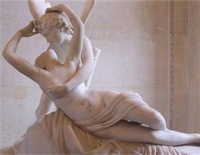 Eroticism (from the Greek ἔρως, eros—"desire") is generally understood to refer to a state of sexual arousal or anticipation of such – an insistent sexual impulse, desire, or pattern of thoughts, as well as a philosophical contemplation concerning the aesthetics of sexual desire, sensuality and romantic love. As French novelist Honore de Balzac pointed out, eroticism is dependent not just upon an individual's sexual morality, but the culture and time that individual resides in as well.

For lessons on the related topic of Sexuality, follow this link.

For a psychoanalytical definition, as early as Freud psychotherapists have turned to the ancient Greek philosophy's "overturning of mythology" as a definition to understanding of the heightened aesthetic. For Plato, Eros takes an almost transcendent manifestation when the subject seeks to go beyond itself and form a communion with the objectival other: "the true order of going...to the things of love, is to use the beauties of earth as steps...to all fair forms, and from fair forms to fair actions, and from fair actions to fair notions, until from fair notions he arrives at the notion of absolute beauty".

Modern French conceptions of eroticism can be traced to The Enlightenment, when "in the eighteenth century, dictionaries defined the erotic as that which concerned love...eroticism was the intrusion into the public sphere of something that was at base private". This theme of intrusion or transgression was taken up in the twentieth century by the French philosopher Georges Bataille, who argued that eroticism performs a function of dissolving boundaries between human subjectivity and humanity, a transgression that dissolves the rational world but is always temporary, as well as that, "Desire in eroticism is the desire that triumphs over the taboo. It presupposes man in conflict with himself". For Bataille, as well as many French theorists, "Eroticism, unlike simple sexual activity, is a psychological quest...eroticism is assenting to life even in death".[1]