From Nordan Symposia
(Redirected from Escaping)
Jump to navigationJump to search 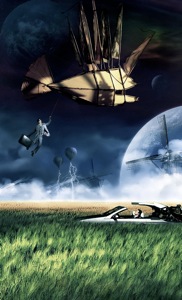 The earliest forms recorded in Eng. appear to be ASCAPE (after the ONF. variant ascaper) and the aphetic SCAPE, which occur in 13th c.; the former survived until 16th c.; the latter continued in ordinary use until 17th c., and as a poetic archaism (often written 'scape) is still employed. In 14th c. the forms of Central Fr. origin, eschape, ASCHAPE, ACHAPE, aphetically SCHAPE, CHAPE, are of frequent occurrence, esp. in northern writers, while in southern use the forms from Northern Fr., escape, ASCAPE, SCAPE, were more common. After 15th c. the former type is found only in Sc. writers, finally disappearing in 17th c. The forms ATSCAPE, OFSCAPE, occasional in 13-14th c., appear to be due to a confusion of the initial a- in ascape with the prepositional prefix in synonymous Eng. vbs.

b : to issue from confinement <gas is escaping>
c of a plant : to run wild from cultivation

2 : to avoid a threatening evil <the boat sank but the crew escaped>

For lessons on the topic of Escape, follow this link.

Some escapologists' tricks are accomplished by illusionists' techniques; others are genuine acts of flexibility, strength and daring.