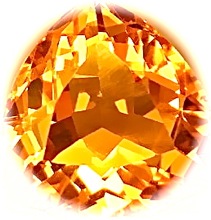 Facets are flat faces on geometric shapes. The organization of naturally occurring facets was key to early developments in crystallography, since they reflect the underlying symmetry of the crystal structure. Gemstones commonly have facets cut into them in order to improve their appearance.

Of the hundreds of facet arrangements that have been used, the most famous is probably the round brilliant cut, used for diamond and many colored gemstones. This first early version of what would become the modern Brilliant Cut is said to have been devised by an Italian named Peruzzi, sometime in the late 17th century. Later on, the first angles for an "ideal" cut diamond were calculated by Marcel Tolkowsky in 1919. Slight modifications have been made since then, but angles for "ideal" cut diamonds are still similar to Tolkowsky's formula. Round brilliants cut before the advent of "ideal" angles are often referred to as "Early round brilliant cut" or "Old European brilliant cut" and are considered poorly cut by today's standards, though there is still interest in them from collectors. Other historic diamond cuts include the "Old Mine Cut" which is similar to early versions of the round brilliant, but has a rectangular outline, and the "rose" cut which is a simple cut comprised of a flat, polished back, and varying numbers of angled facets on the crown, producing a faceted dome. Sometimes a 58th facet, called a culet is cut on the bottom of the stone to help prevent chipping of the pavilion point. Earlier brilliant cuts often have very large culets, while modern brilliant cut diamonds generally lack the culet facet, or it may be present in minute size. The Princess cut is also a popular diamond cut.

A faceted classification system allows the assignment of multiple classifications to an object, enabling the classifications to be ordered in multiple ways, rather than in a single, pre-determined, taxonomic order. A facet comprises "clearly defined, mutually exclusive, and collectively exhaustive aspects, properties or characteristics of a class or specific subject". For example, a collection of books might be classified using an author facet, a subject facet, a date facet, etc.

Faceted classification is used in faceted search systems that enable a user to navigate information along multiple paths corresponding to different orderings of the facets. This contrasts with traditional taxonomies in which the hierarchy of categories is fixed and unchanging.

Faceted classification systems are also distinct from folksonomies or other tagging systems that do not break out the tags into independent facets.