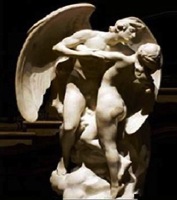 Fallen angel is a concept that is typically synonymous with a wicked or rebellious angel. As the actual term fallen angel is not found in either the Hebrew Bible or the Deuterocanonical Books or the New Testament, biblical commentators use this term to describe angels who sinned or angels cast down to the earth from the War in Heaven, such as Satan, demons, or certain Watchers.

A Jewish myth of angels coming down to earth rather than being cast down, referred to as the myth of angelic descent, is found chiefly in the Jewish pseudepigraphic Book of Enoch, 6-9 and the Qumran Book of Giants and perhaps in Genesis 6:1-4. The angels in question were Watchers who were inveigled by the beauty of human women, had intercourse with them and corrupted mankind. They were the prime instigators of the sinfulness that led to the Great Deluge. This myth was adopted by early Christianity, but abandoned by Rabbinic Judaism and later Christianity. During the period immediately before the rise of Christianity, the intercourse between these Watchers and human women was often seen as the first fall of the angels.[9]

In the period immediately preceding the composition of the New Testament, some sects of Judaism identified the "sons of God" (בני האלהים) of Genesis 6:1-4 with fallen angels. Some scholars consider it most likely that this Jewish tradition of fallen angels predates, even in written form, the composition of Gen 6:1-4. Lester L. Grabbe calls the story of the sexual intercourse of angels with women "an old myth in Judaism". Indeed, until the mid-2nd century AD, Jewish writing (such as midrashim) can be taken to identify the "sons of God" of Gen 6:1 and 4 as angels. By the 3rd century, there is evidence that some early Christians accepted this Jewish Enochic pseudepigraphy and the application of the angelic descent myth to the "sons of God" passage in Genesis 6:1-4, Its presence not only in the East but also in the Latin-speaking West is attested by the polemic of Augustine of Hippo (354–430) against the motif of giants born of the union between fallen angels and human women. Rabbinic Judaism and Christian authorities rejected the tradition. Those who adopted the tradition viewed the "sons of God" as fallen angels who married human women and by unnatural union begot the Nephilim.

The Second Book of Enoch refers to "the Grigori, who with their prince Satanail rejected the Lord of light". The Grigori are identified with the Watchers of 1 Enoch. The Grigori who "went down on to earth from the Lord's throne", married women and "befouled the earth with their deeds", resulting in confinement under earth (2 Enoch 18:1-7) In the longer recension of 2 Enoch, chapter 29 refers to angels who were "thrown out from the height" when their leader tried to become equal in rank with the Lord's power (2 Enoch 29:1-4).

Most sources quote 2 Enoch as stating that those who descended to earth were three, but Andrei A. Orlov, while quoting 2 Enoch as saying that three went down to the earth, remarks in a footnote that some manuscripts put them at 200 or even 200 myriads. In The Old Testament Pseudepigrapha: Apocalypic Literature and Testaments edited by James H. Charlesworth, manuscript J, taken as the best representative of the longer recension, has "and three of them descended" (p. 130), while manuscript A, taken as the best representative of the shorter recension, has "and they descended", which might indicate that all the Grigori descended, or 200 princes of them, or 200 princes and 200 followers, since it follows the phrase "These are the Grigori, 200 princes of whom turned aside, 200 walking in their train" (p. 131).

Chapter 29, referring to the second day of creation, before the creation of human beings, says that "one from out the order of angels" or, according to other versions of 2 Enoch, "one of the order of archangels" or "one of the ranks of the archangels" "conceived an impossible thought, to place his throne higher than the clouds above the earth, that he might become equal in rank to [the Lord's] power. And [the Lord] threw him out from the height with his angels, and he was flying in the air continuously above the bottomless." In this chapter the name "Satanail" is mentioned only in a heading added in a single manuscript, the GIM khlyudov manuscript, [28] which is a representative of the longer recension and was used in the English translation by R.H. Charles.

The lasting influence of this concept is illustrated in the literature of John Milton's Paradise Lost (7.131-134, etc.), refers to Satan as being "brighter once amidst the host of Angels, than the sun amidst the stars."[1]