While a fathom is a unit of length in the Imperial system (and the derived U.S. customary units), used especially for measuring the depth of water, increasingly, the word fathom is found increasingly in metaphorical usage. An example is Columbia University's aborted launch of Fathom.com (logo at right) one the first serious efforts to harness the web for educational purposes.

There are 2 yards (6 feet) in a fathom.[1] Based on the distance between the fingertips of a man's outstretched arms, its size varied slightly depending on whether it was defined as a thousandth of an (Admiralty) nautical mile or as a multiple of the imperial yard. Formerly, the term was used for any of several units of length varying around 5 and 5½ feet.

The name derives from the Old English word fæðm meaning embracing arms or a pair of outstretched arms.[2][3][4] In Middle English it was fathme.

A brass was a unit of length equal to a fathom. A cable length, based on the length of a ship's cable, has been variously reckoned as equal to 100 or 120 fathoms. At one time, a quarter meant a fourth of a fathom.

One fathom is equal to:

In 1959 the United States, Australia, Canada, New Zealand, South Africa, and the United Kingdom defined the length of the international yard to be exactly 0.9144 metre. With the adoption of the metric SI system the use of fathoms declined.

The British Admiralty defined a fathom to be a thousandth of an imperial nautical mile (which was 6080 ft) or 6.08 feet. In practice the "warship fathom" of exactly 6 feet was used in Britain and the United States.[5] No conflict in the real world existed as depths on Imperial nautical charts were indicated in feet if less than 30 feet and in fathoms for depths above that. Until the 19th century in England, the length of the fathom was more variable: from 5½ feet on merchant vessels to either 5 feet or 7 feet on fishing vessels.[5]

Use of the fathom

Most modern nautical charts indicate depth in metres. However, the U.S. Hydrographic Office uses feet and fathoms.[6] A nautical chart will always explicitly indicate the units of depth used.

This technique has been superseded by sonic depth finders for measuring mechanically the depth of water beneath a ship, one version of which is the Fathometer (trademark).[11] The record made by such a device is a fathogram.[12] A fathom line or fathom curve, a usually sinuous line on a nautical chart, joins all points having the same depth of water, thereby indicating the contour of the ocean floor.[13]

The components of a commercial fisherman’s setline were measured in fathoms. The rope called groundline, used to form the main line of a setline, was usually provided in bundles of 300 fathoms. A single 50-fathom skein of this rope was referred to as a line. Especially in Pacific coast fisheries the setline was composed of units called skates, each consisting of several hundred fathoms of groundline, with gangions and hooks attached. A tuck seine or tuck net about 70 fathoms long and very deep in the middle was used to take fish from a larger seine.

A line attached to a whaling harpoon was about 150 fathoms long. A forerunner — a piece of cloth tied on a ship's log line some fathoms from the outboard end — marked the limit of drift line. A kite was a drag, towed under water at any depth up to about 40 fathoms, that on striking bottom was upset and rose to the surface.

A shot, one of the forged lengths of chain joined by shackles to form an anchor cable, was usually 15 fathoms long.

It is customary, when burying the dead, to inter the corpse at a fathom's depth, or six feet under. A burial at sea (where the body is weighted to force it to the bottom) requires a minimum of six fathoms of water. This is the origin of the phrase to deep six, meaning to discard, or dispose of.[14]

Until early in the 20th century, it was the unit used to measure the depth of mines (mineral extraction) in the United Kingdom.[15] Miners also use it as a unit of area equal to 6 square feet in the plane of a vein.[2] In Britain, it can mean the quantity of wood in a pile of any length measuring 6 feet square in cross section.[2]

Other fathoms and similar units of length 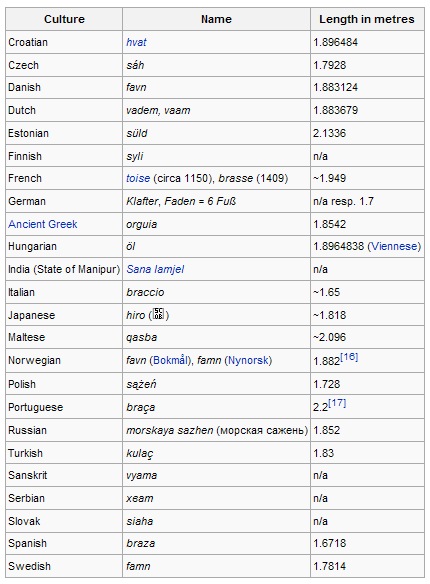