From Nordan Symposia
(Redirected from Glorifies)
Jump to navigationJump to search 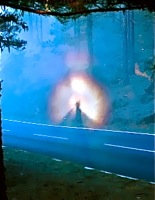 Glory is one of the most common words in scripture. In the Old Testament, the word is used to translate several Hebrew words, including Hod (הוד) and kabod; and in the New Testament it is used to translate the Greek word doxa (δόξα). The Hebrew word kabod (K-B-D) originally means "weight" or "heaviness." The same word is then used to express importance, honor, and majesty. Greek versions of the Hebrew Bible translated this concept with the word doxa, which was then used extensively in the New Testament as well. Doxa originally means "judgment, opinion", and by extension, "good reputation, honor". Assuming that these various words and uses should refer to a single underlying concept, St. Augustine renders it as clara notitia cum laude, "brilliant celebrity with praise".

For lessons on the topic of Glory, follow this link.

b. Desire for fame; ambition. Obs.

b. the glory of God: the honour of God, considered as the final cause of creation, and as the highest moral aim of intelligent creatures.

b. nonce-use. Obs.
c. Used as a devout ejaculation (short for Glory be to God) in the worship of various religious sects. Hence vulgarly as a mere exclamation expressive of delight. Also in form glory be!

b. A representation of the heavens opening and revealing celestial beings. ? Obs. (Cf. F. gloire.)
c. transf. Any circle or ring of light; a halo, corona. Also, a name for the star of an order of knighthood (obs.), and spec. an anthelion or fog-bow.
d. Bot. = CORONA 7b. Obs.

Glory (from the Latin gloria, "fame, renown") is used to denote the manifestation of God's presence in the Judeo-Christian religious tradition. God's glory is often associated with visible displays of light, e.g. thunderbolts, fire, brightness.

Divine glory is an important motif throughout Judeo-Christian theology, where God is regarded as the most glorious being. Since they are created in the Image of God, human beings can share or participate in divine glory as image-bearers. Like a mirror, the human person reflects God's glory, though imperfectly.