From Nordan Symposia
(Redirected from Horrified)
Jump to navigationJump to search 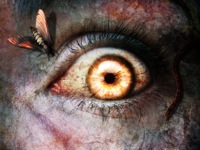 Middle English horrour, from Anglo-French orur, from Latin horror action of bristling, from horrēre to bristle, shiver; akin to Sanskrit harṣate he is excited. The Latin horrere is the root of words such as "horrific" or "horror"; it means "to stand on end" and refers to the standing hairs of goose bumps, otherwise known as 'horripilation'

b : intense aversion or repugnance

b : something that inspires horror

For lessons on the topic of Horror, follow this link.

The distinction between horror and terror is a standard literary and psychological concept applied especially to Gothic literature and film. Terror is usually described as the feeling of dread and anticipation that precedes the horrifying experience. By contrast, horror is the feeling of revulsion that usually occurs after something frightening is seen, heard, or otherwise experienced. It is the feeling one gets after coming to an [Awe|awful]] realization or experiencing a deeply unpleasant occurrence. In other words, horror is more related to being shocked or scared (being horrified), while terror is more related to being anxious or fearful, being terrified. Horror has also been defined as a combination of terror and revulsion.

The distinction between terror and horror was first characterised by the Gothic horror writer Ann Radcliffe (1764–1823). Terror is characterised by "obscurity" or indeterminacy in its treatment of potentially horrible events; it is this indeterminacy which leads to the sublime. She says in the essay that it "expands the soul and awakens the faculties to a high degree of life". Horror, in contrast, "freezes and nearly annihilates them" with its unambiguous displays of atrocity. She goes on: "I apprehend that neither Shakespeare nor Milton by their fictions, nor Mr Burke by his reasoning, anywhere looked to positive horror as a source of the sublime, though they all agree that terror is a very high one; and where lies the great difference between horror and terror, but in uncertainty and obscurity, that accompany the first, respecting the dreader evil."

According to Devendra Varma in The Gothic Flame (1966):

Horror is also a genre of film and fiction that relies on horrifying images or situations to tell stories and prompt reactions in their audiences. In these films the moment of horrifying revelation is usually preceded by a terrifying build up, often using the medium of scary music.