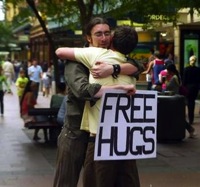 b : to hold fast : cherish - hugged his miseries like a sulky child — John Buchan

A hug is a form of physical intimacy, that usually involves closing or holding the arms around the neck, back, or waist of another person; if more than two persons are involved, this is referred to as a group hug. A hug, sometimes in association with a kiss, eye contact or other gestures, is a form of nonverbal communication. Depending on culture, context and relationship, a hug can indicate familiarity, love, affection or friendship. One person may hug another as an indication of support, comfort, and consolation. A hug can be a demonstration of affection and emotional warmth, sometimes arising out of joy or happiness at meeting someone. Sometimes hugs are a romantic exchange.

Unlike some other forms of physical intimacy, when both parties mutually engage in the act, a hug can be practiced publicly and privately without stigma in many countries, religions and cultures, within families, and also across age and gender lines, but is generally an indication that people are familiar with each other. An unexpected hug can be regarded as an invasion of a person's personal space, but if it is reciprocated it is an indication that it is welcome. Also, a person, especially a child, may caress and hug a doll or stuffed animal. Young children will also hug their parents when they feel threatened by an unfamiliar person.

Unlike a kiss, a hug is not usually undertaken as part of a ritual or social act. However, it is a custom in Spain and, by proxy, in Latin American countries for male friends to hug (as well as slap each other on the back) in a joyous greeting, such as on a New Year. A similar hug, usually accompanied with a kiss on the cheek, is also becoming a custom among Western women to convey a joyous greeting and sorrowful parting. Also, in recent years it has become a practice amongst some teenage girls to greet and farewell each other with a hug. In May 2009, the New York Times reported that "the hug has become the favorite social greeting when teenagers meet or part these days" in the United States. A number of schools in the United States have issued bans on hugs, which in some cases have resulted in student-led protests against these bans. In the Roman Catholic rite of the Holy Mass a hug may be substituted for a kiss or handshake during the kiss of peace ritual. Several cultures do not embrace as a sign of affection or love, such as the Himba in Namibia.

Hugging has been proven to have health benefits. One study has shown that hugs increase levels of oxytocin, and reduce blood pressure.