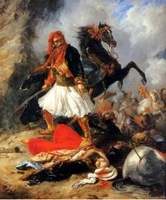 A feud (pronounced /ˈfjuːd/) (referred to in more extreme cases as a blood feud or vendetta or faida) is a long-running argument or fight between parties—often, through association fallacy, groups of people, especially families or clans. Feuds begin because one party (correctly or incorrectly) perceives itself to have been attacked, insulted or wronged by another. Intense feelings of resentment trigger the initial revenge, which causes the other party to feel equally aggrieved and vengeful. The dispute is subsequently fuelled by a long-running cycle of retaliatory violence. This continual cycle of provocation and retaliation makes it extremely difficult to end the feud peacefully. Feuds frequently involve the original parties' family members and/or associates, can last for generations and may result in extreme acts of violence.

Until the early modern period, feuds were considered legitimate legal instruments and were regulated to some degree. Once modern centralizing states asserted and enforced a monopoly on legitimate use of force, feuds became illegal and the concept acquired its current negative connotation.

A blood feud is a feud with a cycle of retaliatory violence, with the relatives of someone who has been killed or otherwise wronged or dishonored seeking vengeance by killing or otherwise physically punishing the culprits or their relatives. Historically, the word vendetta has been used to mean a blood feud. The word is Italian, and originates from the Latin vindicta (vengeance). In modern times, the word is sometimes extended to mean any other long-standing feud, not necessarily involving bloodshed.[1]