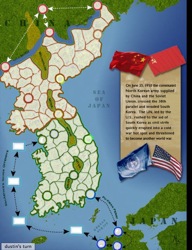 The Korean War refers to a period of military conflict between North Korea (officially the Democratic People's Republic of Korea) and South Korea (officially the Republic of Korea) regimes, with major hostilities lasting from June 25, 1950 until the armistice signed on July 27, 1953. The conflict arose from the attempts of the two Korean powers to re-unify Korea under their respective governments. The period immediately before the war was marked by escalating border conflicts at the 38th Parallel and attempts to negotiate elections for the entirety of Korea. [1] These negotiations ended when the North Korean Army invaded the South on June 25, 1950.

While some have referred to the conflict as a civil war, many other factors were at play.[2] Each side was supported by external powers and the conflict expanded, becoming a proxy battle in the Cold War between the United States and the Soviet Union. The term has also been used to describe both the events preceding and following the main hostilities.[3]