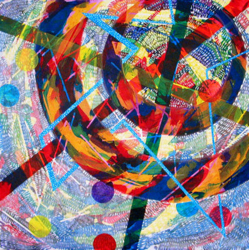 Macrocosm and microcosm is an ancient Greek schema of seeing the same patterns reproduced in all levels of the cosmos. It may have begun with Democritus in the 5th century B.C. or with Pythagoras and is a philosophical conception that runs through Socrates, and Plato all the way to the Renaissance. With Pythagoras, the discovery of the golden ratio and its philosophical conception called the Golden mean, the Greeks observed the golden ratio in many parts of the ordered universe both large and small. Philosophically, the Greeks were concerned with a rational explanation of everything and saw the repetition of the golden mean throughout the world and all levels of reality as a step towards this unifying theory. In short, it is the recognition that the same traits appear in entities of many different sizes, from one man to the entire human population.

Macrocosm/microcosm is a Greek compound of μακρο- "Macro-" and μικρο- "Micro-", which are Greek respectively for "large" and "small", and the word κόσμος kósmos which means "order" as well as "world" or "ordered world".

For lessons on the topic of Microcosm, follow this link.

Macrocosm/microcosm is a in Socratic/Platonic philosophy. Plato's The Republic, strongly influenced by Socratic thought, is based on this fundamental principle. This text is a discussion originally about righteousness (justice) for man and the nature of it. At §368, Socrates mentions that this virtue is “spoken as a virtue of an individual, and sometimes as the virtue of the state” and that it would be easier to discern its essence if one looked at the State because it would have a larger quantity of it and then proceeding back down into the individual to see how it appears in the smaller unit.

Furthermore, there is a tight interrelationship between the macrocosm and the microcosm in the human sphere. Socrates says, “Must we not acknowledge, I said, that in each of us there are the same principles and habits which there are in the state; and that from the individual they pass into the state?—how else can they come there? (1) It can be paraphrased as “How goes the part, so goes the Whole”. In their science of politics, Socrates and Plato both saw this principle at work.

This principle is also prevalent in Plato and his theory of “Forms”, and permeated the thinking of Hermetic philosophers and alchemists. The earliest known usage of this schema, among them, can be dated to the 3rd century BCE by the Greek Olympiadorus, who stated, "the mythic Hermes calls man a small cosmos", the literal meaning of mikro-kosmos. Hermes Trismegistus's axiom As above, so below meaning that all that is in the Cosmos is mirrored in man the small universe, also reflects the macro/micro correspondence.

The English physician and alchemist Robert Fludd (1574-1637) expicitly based his work Utriusque Cosmi Historia (The history of the two worlds) upon the macro/micro correspondence; as did Sir Thomas Browne in his binary Discourses of 1658: Hydriotaphia, Urn Burial depicts the small, temporal world of man, whilst The Garden of Cyrus represents the macrocosm, in which the ubiquitous and eternal quincunx pattern is discerned in art, nature and the Cosmos.

The great enigma of alchemy is the mystery between the macrocosm and microcosm. Equally an unsolved enigma of English literature is the relationship between Browne's diptych Discourses: the microcosm world of Hydriotaphia, Urn Burial and the macrocosm world of The Garden of Cyrus. Today, the concept of microcosm has been taken over by sociology to mean a small group of individuals whose behavior is typical of a larger social body encompassing it. A microcosm can be seen as a special kind of epitome.

Conversely, a macrocosm is a social body made of smaller compounds.