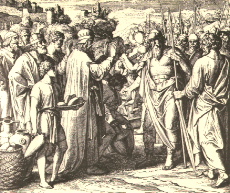 Mamre, full Hebrew name Elonei Mamre ("Oaks of Mamre"), is where Abraham built an altar (Genesis 13:18). An ancient well, more than 5 m in diameter, is referred to as Abraham's Well. It is perhaps also where David reigned, as archaeological excavations show signs of towers and walls from Davidic kingdom and early monarchy. A 2m thick stone wall enclosing area 60m wide and 83m long was constructed by Herod the Great, possibly as place of worship or walled compound serving later as market place or caravanserai. Hadrian chose the site to sell remnants of Bar Kochba's army into slavery.

The ground was reconsecrated by the Emperor Constantine with the Basilica of the Terebinth of Mamre, the foundations of which are still visible. It has been desolate since the Arab conquest in 7th century.

Mamre is also the name of one of the Canaanite chiefs who joined his forces with those of Abraham in pursuit of Chedorlaomer to save Lot. (Gen. 14:13,24)