From Nordan Symposia
(Redirected from Materialize)
Jump to navigationJump to search 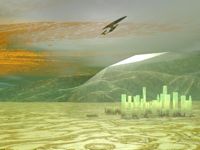 The most famous example of a materialization in Christianity is the story of the multiplication of bread and fish by Jesus to feed a hungry crowd, according to the Bible (John 6:1-15 & Mark 6:35-44) or alternatively Genesis where everything came out of nothing.

For lessons on the topic of Materialization, follow this link.

The contemporary gurus Indian Sathya Sai Baba (SSB) and Swami Premananda claim to perform materializations. Spontaneous vibuthi (holy ash) manifestations are also reported by followers of SSB on his pictures at their homes.[1][2][3][4]

It was 1,973 years before the birth of Jesus that Machiventa was bestowed upon the human races of Urantia. His coming was unspectacular; his materialization was not witnessed by human eyes. He was first observed by mortal man on that eventful day when he entered the tent of Amdon, a Chaldean herder of Sumerian extraction. And the proclamation of his mission was embodied in the simple statement which he made to this shepherd, "I am Melchizedek, priest of El Elyon, the Most High, the one and only God."[1]