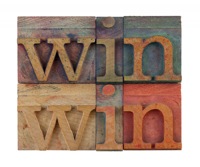 Medieval Latin mediatus, past participle of mediare, from Late Latin, to be in the middle, from Latin medius middle

b : to effect by action as an intermediary

b : to transmit as intermediate mechanism or agency
intransitive verb

The activity of mediation in itself appeared in very ancient times. Historians presume early cases in Phoenician commerce (but suppose its use in Babylon, too). The practice developed in Ancient Greece (which knew the non-marital mediator as a proxenetas), then in Roman civilization, (Roman law, starting from Justinian's Digest of 530 - 533 CE) recognized mediation. The Romans called mediators by a variety of names, including internuncius, medium, intercessor, philantropus, interpolator, conciliator, interlocutor, interpres, and finally mediator.

Some cultures regarded the mediator as a sacred figure, worthy of particular respect; and the role partly overlapped with that of traditional wise men or tribal chief.

"Conciliation" sometimes serves as an umbrella-term that covers all mediation and facilitative and advisory dispute-resolution processes. Neither process determines an outcome, and both share many similarities. For example, both processes involve a neutral third-party who has no enforcing powers.

One significant difference between conciliation and mediation lies in the fact that conciliators possess expert knowledge of the domain in which they conciliate. The conciliator can make suggestions for settlement terms and can give advice on the subject-matter. Conciliators may also use their role to actively encourage the parties to come to a resolution. In certain types of dispute the conciliator has a duty to provide legal information. This helps any agreement reached to comply with any relevant statutory framework pertaining to the dispute. Therefore conciliation may include an advisory aspect.

Mediation works purely facilitatively: the practitioner has no advisory role. Instead, a mediator seeks to help parties to develop a shared understanding of the conflict and to work toward building a practical and lasting resolution.

Furthermore, the definitions of mediation used by the different styles of mediation differ in that evaluative mediation has the main drive and goal of settlement, while transformative mediation, in contrast, looks at conflict as a crisis in communication and seeks to help resolve the conflict, thereby allowing people to feel empowered in themselves and better about each other. The agreement that arises from this type of mediation occurs as a natural outcome of the resolution of conflict.

Both mediation and conciliation serve to identify the disputed issues and to generate options that help disputants reach a mutually-satisfactory resolution. They both offer relatively flexible processes; and any settlement reached should have the agreement of all parties. This contrasts with litigation, which normally settles the dispute in favour of the party with the strongest legal argument. In-between the two operates collaborative law, which uses a facilitative process where each party has counsel. [1]