From Nordan Symposia
(Redirected from Processes)
Jump to navigationJump to search 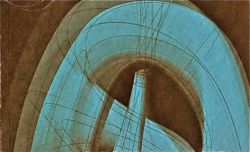 Process thought emphasizes the ultimate significance of time's forward flow and the change of those things that exist in time. The accent upon time as integral to existence means that process thought considers life to be comprised of events or, as the philosopher William James (1842–1910) would say, "drops" of experience whose character is established by how each becomes. What might appear to be solid matter is really a dance of energy events and interconnections.

Alfred North Whitehead (1861–1947), considered by many to be process thought's chief philosopher, argued that the elucidation of meaning involved in the phrase "all things flow" is one chief task of philosophy. All actually existing "things" change due to their temporality, but the metaphysical principles, mathematic and definitional abstractions, and the essence of God do not change.

For lessons on the topic of Process, follow this link.

The world is not made up of vacuous substances or wholly self-contained atoms whose relationship to others is entirely external. Rather, argue process thinkers, all actually existing things (events) are internally related to other things. Life itself evolves through mutual influence. Reality is social, but individual events construct the particular factual character of social existence through moment by moment decisions in relationship with others. The process philosophical notion that all existence is interrelated corresponds well with quantum and relativity theories in physics. The interconnectedness of existence is supported by the observation made by physicists that observers of a particular phenomenon produce changes by merely observing the phenomenon.

Comprehending what process thinkers reject may also be helpful when identifying this movement. Process thought rejects the notion that existence is fundamentally comprised of mechanistic, lifeless matter. Instead, process thinkers affirm that existence is organismic, enchanted, and interrelated. The organismic nature of process thought fits well with general evolutionary hypotheses pertaining to the gradual emergence of new and complex species through natural selection, randomness, and adaptation. Process thought affirms that the emergence of highly developed life forms typically entails genealogical connection and descent with modification.

Process thought rejects the claim that creatures are entirely determined or predestined either by the laws of nature, their genes, the environment, or God. Instead, freedom, creativity, novelty, and individual purpose are affirmed because each event is partly self-creative as it responds to the influence of others. Process categories affirm both that individuals are partly self-organized and partly fashioned by others.

Process thinkers typically reject mind-body dualism whereby one's mind or soul is entirely mental and one's bodily members are entirely physical. Process thinkers also typically reject materialistic physicalism, which ultimately denies that mentality and mind exist at all. Instead, many process thinkers speak of mind in nature when adhering to the panexperientialist (or panpsychist) hypothesis proposed by Whitehead and others. The panexperientialist solution to the mind-body problem entails the nondualist hypothesis that all events, including mind events and those events that comprise one's body, have both mental and physical aspects. Events of the same kind can be mutually influencing.

Although most process thinkers are theists, they typically reject theistic doctrines influenced bytraditional metaphysical philosophies. The process theologies emerging from the thought of Whitehead and Charles Hartshorne (1897–2000) exert the greatest influence. These two process scholars call God dipolar to signify two different dualities: God is influenced by others and influences others, and God is changing and unchanging.

The first dipolarity, God's influence upon the world and the world's influence back on God, is more pronounced in Whitehead's thought. Whitehead speculates that God adds Godself to that from which every creative act emerges. Creatures respond to this divine action, and their response subsequently exerts influence back upon God.

The second dipolarity, God as both unchanging and changing, is more pronounced in Hartshorne's thought. By this dipolarity, Hartshorne means that God's abstract essence is absolute, necessary, and eternal, while God's concrete actuality is everlastingly relative or contingent. The unchanging pole of the divine essence includes attributes that classical philosophical theologies often ascribe to divinity (e.g., necessity, impassibility, infallibility, eternality, and immutability). The changing aspect of God is expressed in God's experience (e.g., suffering, rejoicing, sympathy, and contingency) as deity interacts, moment-by-moment, with creation.

Process thinkers often speculate that God relates essentially with the world, and Hartshorne calls this God-world model panentheism (all things are in God). Panentheism is illustrated by the relationship the members of one's body have with one's soul (or mind) because this relationship is analogous to the way the world is in God. Just as the mind naturally interacts with the brain and other members of the body without being ontologically different, so God naturally interacts with the world without being ontologically different. Just as the mind is an actuality distinct from other actualities in the body, so God is an actuality distinct from other actualities in the world.