From Nordan Symposia
(Redirected from Modeled)
Jump to navigationJump to search 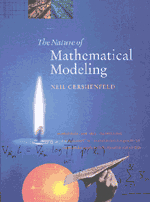 Eykhoff (1974) defined a mathematical model as 'a representation of the essential aspects of an existing system (or a system to be constructed) which presents knowledge of that system in usable form'.

Mathematical models can take many forms, including but not limited to dynamical systems, statistical models, differential equations, or game theoretic models. These and other types of models can overlap, with a given model involving a variety of abstract structures.

Note this model assumes the particle is a point mass, which is certainly known to be false in many cases we use this model, for example, as a model of planetary motion.

This model has been used in general equilibrium theory, particularly to show existence and Pareto optimality of economic equilibria. However, the fact that this particular formulation assigns numerical values to levels of satisfaction is the source of criticism (and even ridicule). However, it is not an essential ingredient of the theory and again this is an idealization.[1]