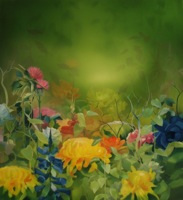 Moderation is the process of eliminating or lessening extremes. It is used to ensure normality throughout the medium on which it is being conducted. Common uses of moderation include:

Moderation is also a principle of life. In ancient Greece, the temple of Apollo at Delphi bore the inscription Meden Agan - 'Nothing in excess'. Doing something "in moderation" means not doing it excessively. For instance, someone who moderates their food consumption tries to eat all food groups, but limits their intake of those that may cause deleterious effects to harmless levels. Similarly in Christianity, moderationism is the position that drinking alcoholic beverages temperately is permissible, though drunkenness is forbidden (see Christianity and alcohol). Moderation is a characteristic of the Swedish national psyche, more specifically described by the Swedish synonym. Islam also consider moderation as a preferred way of life, even when applying religious norms. Moderate Muslims adhere to the concept of contextual relativism as a way to grasp meaning from the Quran. They also understand the Quran as a whole opposed to a discrete understanding. Furthermore, Moderate Muslims also follow various types of Hadith (prophet Mohammed's sayings) that favor moderation and view muhammad as an ideal example of a moderate Muslim and human.[1]