From Nordan Symposia
(Redirected from Alcoholic)
Jump to navigationJump to search 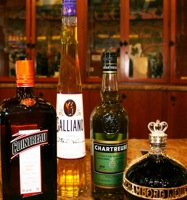 The origin of "liquor" and its close relative "liquid" was the Latin verb liquere, meaning "to be fluid." According to the Oxford English Dictionary, an early use of the word in the English language, meaning simply "a liquid," can be dated to 1225. The first use that the OED mentions in reference to a "liquid for drinking" occurred in the early- to mid-1300s. Its use as a term for “an intoxicating alcoholic drink” appeared in the 16th century.

The origin of "spirit" in reference to alcohol stems from Middle Eastern alchemy. These alchemists were more involved in medical elixirs than in creating gold from lead. The vapors given off and collected during some of their alchemical processes were described as being the spirits of the original object. When processes akin to distillation were carried out by accident alcohol was produced and the result known as a spirit.

1. a distilled or spirituous beverage, as brandy or whiskey, as distinguished from a fermented beverage, as wine or beer. 2. any liquid substance, as broth from cooked meats or vegetables. 3. Pharmacology . solution 4. a solution of a substance, esp. a concentrated one used in the industrial arts.

A distilled beverage, liquor, or spirit is a drinkable liquid containing ethanol that is produced by distilling fermented grain, fruit, or vegetables. This excludes undistilled fermented beverages such as beer, wine, and hard cider.

The term hard liquor is often used in the United States to distinguish distilled beverages from undistilled ones (implicitly weaker).

Beer and wine are limited to a maximum alcohol content of about 15% ABV, as most yeasts cannot reproduce when the concentration of alcohol is above this level; consequently, fermentation ceases at that point.

The term spirit refers to a distilled beverage that contains no added sugar and has at least 20% ABV. Popular spirits include brandy, fruit brandy (also known as eau-de-vie / Schnapps), gin, rum, tequila, vodka, and whisky.

Distilled beverages that are bottled with added sugar and added flavorings, such as Grand Marnier, Frangelico, and American schnapps, are liqueurs. In common usage, the distinction between spirits and liqueurs is widely unknown or ignored; consequently all alcoholic beverages other than beer and wine are generally referred to simply as spirits.

Fortified wines are created by adding a distilled beverage (often brandy) to a wine.[1]