From Nordan Symposia
(Redirected from Myths)
Jump to navigationJump to search 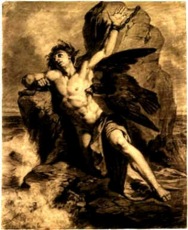 Myth is derived from the Greek word mythos, which means "word of mouth."

For lessons on the topic of Myth, follow this link.

In the academic fields of mythology, mythography, or folkloristics, a myth is a sacred story concerning the origins of the world or how the world and the creatures in it came to be in their present form. The active beings in myths are generally gods and heroes. Myths often are said to take place before recorded history begins. In saying that a myth is a sacred narrative, what is meant is that a myth is believed to be true by people who attach religious or spiritual significance to it. Use of the term by scholars does not imply that the narrative is either true or false.

In popular use, a myth is something that is widely thought to be false. This usage, which is often pejorative, arose from labeling the religious myths and beliefs of other cultures as being incorrect, but it has spread to cover non-religious beliefs as well. Because of this usage, many people take offense when the religious narratives they believe to be true are called myths (see religion and mythology for more information). This usage is frequently confused with legend, fiction, fairy tale, folklore, fable, and urban legend, each of which has a distinct meaning in academia.

Urban myth is an alternate term for urban legend.