From Nordan Symposia
(Redirected from Newness)
Jump to navigationJump to search 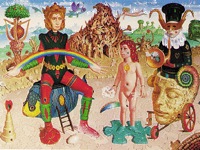 For lessons on the topic of Novelty (Newness), follow this link.

Novelty (derived from Latin word novus for "new") is the quality of being new, or following from that, of being striking, original or unusual. Although it may be said to have an objective dimension (e.g. a new style of art coming into being, such as abstract art or impressionism it generally exists in the subjective perceptions of individuals.

From the meaning of being unusual usage is derived the concept of the novelty dance (a type of dance that is popular for being unusual or humorous); the novelty song (a musical item that capitalizes on something new, unusual, or a current fad); the novelty show (a competition or display in which exhibits or specimens are in way some novel); and novelty architecture (a building or other structure that is interesting because it has an amusing design). It is also this sense that applies to a novelty item, a small manufactured adornment, toy or collectible. These, in turn are often used as promotional merchandise in marketing. The chess term, novelty, is used for a move in chess which has never been played before in a recorded game.

The term can have pejorative sense and refer to a mere innovation. However, novelty in patent law is part of the legal test to determine whether an invention is patentable. A novelty effect is the tendency for performance to initially improve when new technology is instituted.