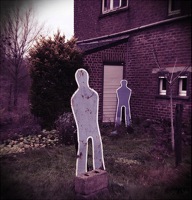 German Nihilismus, from Latin nihil nothing

b : a doctrine that denies any objective ground of truth and especially of moral truths

b capitalized : the program of a 19th century Russian party advocating revolutionary reform and using terrorism and assassination

For lessons on the related topic of Materialism, follow this link.

Nihilism (pron.: /ˈnaɪ.ɨlɪzəm/ or /ˈniː.ɨlɪzəm/; from the Latin nihil, nothing) is the philosophical doctrine suggesting the negation of one or more putatively meaningful aspects of life. Most commonly, nihilism is presented in the form of existential nihilism, which argues that life is without objective meaning, purpose, or intrinsic value. Moral nihilists assert that morality does not inherently exist, and that any established moral values are abstractly contrived. Nihilism can also take epistemological or metaphysical/ontological forms, meaning respectively that, in some aspect, knowledge is not possible, or that reality does not actually exist.

The term nihilism is sometimes used in association with anomie to explain the general mood of despair at a perceived pointlessness of existence that one may develop upon realising there are no necessary norms, rules, or laws. Movements such as Futurism and deconstruction, among others, have been identified by commentators as "nihilistic" at various times in various contexts.

Nihilism is also a characteristic that has been ascribed to time periods: for example, Jean Baudrillard and others have called postmodernity a nihilistic epoch, and some Christian theologians and figures of religious authority have asserted that postmodernity and many aspects of modernity represent a rejection of theism, and that rejection of their theistic doctrine entails nihilism.[1]