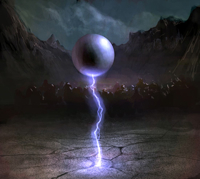 b. Forgetfulness resulting from inattention or carelessness; heedlessness, disregard.
c. Intentional overlooking of an offence, esp. a political one; amnesty, pardon. Chiefly (now with capital initial) in the names of parliamentary acts, etc., granting a general pardon for political offences

An eternal state of oblivion, or lack of awareness, is believed by some to occur after death. This belief contradicts beliefs that there is an afterlife, such as a heaven or hell, after death. The belief in eternal oblivion stems from the idea that the brain creates the mind; therefore, when the brain dies, the mind ceases to exist. Benjamin Franklin writes about this in A Dissertation on Liberty and Necessity, Pleasure and Pain, stating:

In a sound Sleep sometimes, or in a Swoon, we cease to think at all; tho' the Soul is not therefore then annihilated, but exists all the while tho' it does not act; and may not this probably be the Case after Death? . . . . Now upon Death, and the Destruction of the Body, the Ideas contain'd in the Brain, (which are alone the Subjects of the Soul's Action) being then likewise necessarily destroy'd, the Soul, tho' incapable of Destruction itself, must then necessarily cease to think or act, having nothing left to think or act upon.