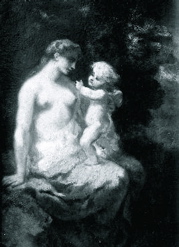 Oral tradition or oral culture is a way for a society to transmit history, literature, law or other knowledge across generations without a writing system. An example that combined aspects of oral literature and oral history, before eventually being set down in writing, is the Homeric epic poetry of the Iliad and the Odyssey. In a general sense, "oral tradition" refers to the transmission of cultural material through vocal utterance, and was long held to be a key descriptor of folklore (a criterion no longer rigidly held by all folklorists). As an academic discipline, it refers both to a method and the objects studied by the method.

The study of oral tradition is distinct from the academic discipline of oral history, which is the recording of personal memories and histories of those who experienced historical eras or events. It is also distinct from the study of orality, which can be defined as thought and its verbal expression in societies where the technologies of literacy (especially writing and print) are unfamiliar to most of the population.

For lessons on the topic of Oral Tradition, follow this link.

History of the study of oral tradition

Oral tradition as a field of study had its origins[1] in the work of the Serb scholar Vuk Stefanovic Karadzic (1787-1864), a contemporary of the Brothers Grimm. Vuk pursued similar projects of "salvage folklore" in the cognate traditions of the southern Slavic regions which would later be gathered into Yugoslavia, and with the same admixture of romantic and nationalistic interests. Somewhat later, but as part of the same scholarly moment, the turcologist Vasily Radlov (1837-1918) would study the songs of the Kara-Kirghiz in what would later become the Soviet Union.

Shortly thereafter, Milman Parry (1902-1935), pursuing a degree in Classics at Harvard, would begin to grapple with what was then called the "Homeric Question," usually framed as "who was Homer?" and "what are the Homeric poems?" The Homeric question actually consists of a series of related inquiries, and Parry's contribution, which drew upon and synthesized the insights of previous scholars including Marcel Jousse, Matija Murko and Arnold van Gennep, was to reconsider the foundational assumptions which framed the inquiries, a re-ordering that would have consequences for a great many literatures and disciplines. Milman Parry. Studies in the epic technique of oral verse-making. I: Homer and Homeric style. Harvard Studies in Classical Philology, Vol. 41 (1930), pp. 118ff.

Parry's work under Antoine Meillet at the Sorbonne led to his crucial insight into the "formula," which he originally defined as "a group of words which is regularly employed under the same metrical conditions to express a given essential idea." Adam Parry (ed.). The Making of Homeric Verse: The Collected Papers of Milman Parry. Clarendon Press, Oxford, 1971, p. 272. Formulas were not individual and idiosyncratic devices of particular artists, but the shared inheritance of a tradition of singers. They were easily remembered, making it possible for the singer to execute an improvisational composition-in-performance. "The meaning of the Greek term 'rhapsodize', rhapsoidein, 'to stitch song together' became ominous: Homer stitched together pre-fabricated parts." Walter J. Ong. Orality and literacy: the technologizing of the word. Routledge, London & New York, 1982, 2002; p. 22

The idea met with immediate resistance, because it seemed to make the fount of Western literary eloquence the slave of a system of clichés, but it accounted for such otherwise inexplicable features of the Homeric poems as gross anachronisms (revealed by advances in historical and archaeological knowledge), the presence of incompatible dialects, and the deployment of locally unsuitable epithets ("blameless Aegisthos" for the murderer of Agamemnon, or the almost comic use of "swift-footed Achilles" for the hero in conspicuously sedentary moments).

Parry was appointed to a junior professorship at Harvard, and during this time became aware of living oral traditions in the Balkan region. In two field expeditions with his young assistant Albert Lord (1912-1991) he would record thousands of songs on aluminum disks. The collection would provide the basis for an empirical documentation of the dynamics of composition of metrical narrative in traditional oral performance. This analysis included the patterns and types of variation at lexical and other levels which would yield a structural account of a work's multiformity. This phenomenon could only be accounted for in standard literary methodology by concepts of “corruption” and “distortion” of a pristine, original “ur-text” or hypothetical “lost Q" ("Quelle", German for "source"). Thus the work of Parry and Lord reduced the prominence of the historic-geographic method in folkloristics.

Tragically, Parry was killed in a pistol-accident. His work was posthumously published by his son Adam Parry as The Making of Homeric Verse (Oxford: Clarendon, 1971). Lord, however, had meanwhile published The Singer of Tales (1960) Albert B. Lord. The Singer of Tales. Harvard Studies in Comparative Literature, 24. Harvard University Press, Cambridge, Mass. 1981, a work which summarized both Parry's response to the Homeric Question, and the joint work he had done with Parry in the Balkans. The Parry-Lord work exercised great influence on other scholars, notably Francis P. Magoun, whose application of their model to Anglo-Saxon traditions demonstrated the explicative and problem-solving power of the theory. Francis P. Magoun, Jr. The oral-formulaic character of Anglo-Saxon narrative poetry. Speculum Vol. 28 (1953) a process that would be repeated by other scholars in numerous independent traditions.

In a separate development, the prominent and provocative media theorist Marshall McLuhan (1911-1980) would begin to focus attention on the ways in which communicative media shape the nature of the content conveyed.<ref>See for example Marshall McLuhan, The Gutenberg Galaxy: The Making of Typographic Man. University of Toronto Press, Toronto, 1962. He would serve as mentor to the brilliant young Jesuit, Walter Ong (1912-2003), whose interests in cultural history, psychology and rhetoric would result in Orality and Literacy (Methuen, 1980) and the important but less-known Fighting for Life: Contest, Sexuality and Consciousness (Cornell, 1981) Walter J. Ong. Fighting for Life: Context, Sexuality and Consciousness. Cornell University Press, Ithaca & London, 1981. These two works successfully and accessibly articulated the contrasts between cultures defined by primary orality, writing, print, and the 'secondary' orality of the electronic age.

I style the orality of a culture totally untouched by any knowledge of writing or print, 'primary orality'. It is 'primary' by contrast with the 'secondary orality' of present-day high technology culture, in which a new orality is sustained by telephone, radio, television and other electronic devices that depend for their existence and functioning on writing and print. Today primary culture in the strict sense hardly exists, since every culture knows of writing and has some experience of its effects. Still, to varying degrees many cultures and sub-cultures, even in a high-technology ambiance, preserve much of the mind-set of primary orality.<ref>Walter J. Ong. Orality and Literacy, p. 11.

Ong's works also made possible an integrated theory of oral tradition which accounted for both production of content (the chief concern of Parry-Lord theory) and its reception. This approach, like McLuhan's, kept the field open not just to the study of aesthetic culture but to the way physical artifacts of oral societies are used to store, manage and transmit knowledge.

The most-often studied section of Orality and Literacy concerns the “psychodynamics of orality”. This chapter seeks to define the fundamental characteristics of 'primary' orality and summarizes a series of descriptors which might be used to index the relative orality or literacy of a given text or society. Walter J. Ong. Orality and literacy: the technologizing of the word

In advance of Ong’s synthesis, John Miles Foley, who studied with Robert Creed (who had in turn studied with Magoun), began a series of papers based on his own fieldwork on South Slavic oral genres, emphasizing the dynamics of performers and audiences.

Foley effectively consolidated oral tradition as an academic field with the first bibliography (1985) and the establishment of both the journal Oral Tradition and the founding of the Center for Studies in Oral Tradition (1986) at the University of Missouri–Columbia. Foley developed Oral Theory beyond the somewhat mechanistic notions presented in Oral-Formulaic Theory by drawing attention to the agency of the bard and by describing the manner in which oral traditions bear meaning.

His massive bibliographical enterprise would establish a clear underlying methodology which accounted for the findings of scholars working in the separate linguistic fields (primarily Ancient Greek, Anglo-Saxon and Serbo-Croatian). Perhaps more importantly, it would stimulate conversation among these specialties, so that a network of independent but allied investigations and investigators could be established.

Foley’s key works include The Theory of Oral Composition (1988); John Miles Foley. The Theory of Oral Composition: History and Methodology. Indiana University Press, Bloomington and Indianapolis, 1988. Immanent Art (1991); Traditional Oral Epic: The Odyssey, Beowulf and the Serbo-Croatian Return-Song (1993); The Singer of Tales in Performance (1995); Teaching Oral Traditions (1998); How to Read an Oral Poem (2002). His Pathways Project (2006-) draws parallels between the media dynamics of oral traditions and the internet.

The theory of oral tradition would undergo elaboration and development as it grew in acceptance. The number of formulas documented for various traditions proliferated. The concept of the formula remained lexically-bound. However, numerous innovations appeared, such as the “formulaic system” with structural “substitution slots” for syntactic, morphological and narrative necessity (as well as for artistic invention). Sophisticated models such as Foley’s “word-type placement rules” followed. Higher levels of formulaic composition were defined over the years, such as “ring composition,” “responsion” and the “type-scene” (also called a "theme" or "typical scene"). Some of these characteristic patterns of narrative details, (like “the arming sequence;” “the hero on the beach;” “the traveler recognizes his goal”) would show evidence of global distribution.

At the same time, the fairly rigid division between oral and literate was replaced by recognition of transitional and compartmentalized texts and societies, including models of diglossia (Brian Stock, Franz Bäuml, Eric Havelock). Perhaps most importantly, the terms and concepts of “orality” and “literacy” came to be replaced with the more useful and apt “traditionality” and “textuality.” Very large units would be defined (The Indo-European Return Song) and areas outside of military epic would come under investigation: women’s song, riddles and other genres.

The methodology of oral tradition now conditions an enormous variety of studies in literature, communication and folklore, including virtually every language and ethnic group, and conspicuously in biblical studies (Werner Kelber). Present developments explore the implications of the theory for rhetoric and composition, intergroup communication, postcolonial studies, rural community development, popular culture and film studies, and many other areas. The most significant areas of theoretical development at present may be the construction of systematic hermeneutics and aesthetics specific to oral traditions.

Some scholars view this body of work as reducing the great epics to children’s party games like “telephone” or “Chinese whispers”. While games provide amusement by showing how messages distort content via uncontextualized transmission, Parry’s supporters argue that the theory of oral tradition reveals how oral methods optimized the signal-to-noise ratio and thus improved the quality and stability of content transmission.