From Nordan Symposia
(Redirected from Paganism)
Jump to navigationJump to search 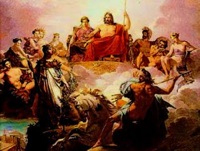 The semantic development of post-classical Latin paganus in the sense "non-Christian, heathen" is unclear. The dating of this sense is controversial, but the https://en.wikipedia.org/wiki/4th_century 4th century] seems most plausible. An earlier example has been suggested in Tertullian De Corona Militis xi, "Apud hunc [sc. Christum] tam miles est paganus fidelis quam paganus est miles fidelis," but here the word paganus is generally interpreted as "civilian," since the alternative would be that Tertullian had written of "In Christ... the faithful pagan." There are three main explanations of the development:

For lessons on the related topic of Paganism, follow this link.

Paganism (from Latin paganus, meaning "country dweller", "rustic") is a blanket term typically used to refer to religious traditions which are polytheistic or indigenous.

It is primarily used in a historical context, Greco-Roman polytheism as well as the polytheistic traditions of Europe and North Africa before Christianization. In a wider sense, extended to contemporary religions, it includes most of the Eastern religions and the indigenous traditions of the Americas, Central Asia, Australia and Africa; as well as non-Abrahamic folk religion in general. More narrow definitions will not include any of the world religions and restrict the term to local or rural currents not organized as civil religions. Characteristic of Pagan traditions is the absence of proselytism and the presence of a living mythology, which informs religious practice.

Ethnologists often avoid the term "pagan," with its uncertain and varied meanings, in referring to traditional or historic faiths, preferring more precise categories such as polytheism, shamanism, pantheism, or animism.

In the late 20th century, "Paganism", or more correctly "Neopaganism", became widely used in reference to adherents of various new religious movement including Wicca. As such, various modern scholars have begun to apply the term to three groups of separate faiths: Historical Polytheism (such as Celtic polytheism,Kemetism,Norse Paganism, the Cultus Deorum Romanorum and Hellenic Polytheistic Reconstructionism also called Hellenismos), Folk/ethnic/Indigenous religions (such as Chinese folk religion and African traditional religion), and Neopaganism (such as Wicca, Neo-Druidism).