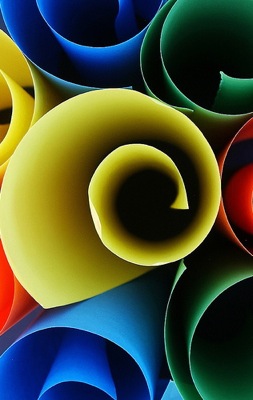 Paper is thin material mainly used for writing upon, printing upon or for packaging. It is produced by pressing together moist fibers, typically cellulose pulp derived from wood, rags or grasses, and drying them into flexible sheets.

Paper is a versatile material with many uses. Whilst the most common is used for writing and printing, it is also widely used as a packaging material, in many cleaning products, in a number of industrial and construction processes, and occasionally as a food ingredient, particularly in Asian cultures.

The word paper derives from the Greek term for the ancient Egyptian writing material called papyrus, which was formed from beaten strips of papyrus plants. The immediate predecessor to modern paper is believed to have originated in China in approximately the 2nd century CE, although there is some evidence for it being used before this date. Papermaking is considered to be one of the Four Great Inventions of Ancient China, since the first papermaking process was developed in China during the early 2nd century CE by the Han court eunuch Cai Lun. China used paper as an effective and cheap alternative to silk, letting them sell more silk, leading to a Golden Age. The use of paper spread from China through the Islamic world, and entered production in Europe in the early 12th century. Mechanized production of paper in the early 19th century caused significant cultural changes worldwide, allowing for relatively cheap exchange of information in the form of letters, newspapers and books for the first time.

The purpose of a chemical pulping process is to break down the chemical structure of lignin and render it soluble in the cooking liquor, so that it may be washed from the cellulose fibers. Because lignin holds the plant cells together, chemical pulping frees the fibres and makes pulp. The pulp can also be bleached to produce white paper for printing, painting and writing. Chemical pulps tend to cost more than mechanical pulps, largely due to the low yield, 40–50% of the original wood. Since the process preserves fibre length, however, chemical pulps tend to make stronger paper. Another advantage of chemical pulping is that the majority of the heat and electricity needed to run the process is produced by burning the lignin removed during pulping.

Papers made from chemical wood-based pulps are also known as woodfree papers.

The Kraft process is the most commonly practiced strategy for pulp manufacturing and produces especially strong, unbleached papers that can be used directly for bags and boxes but are often processed further, e.g. to make corrugated cardboard.

There are two major mechanical pulps, thermomechanical pulp (TMP) and mechanical pulp. The latter is known in the USA as groundwood pulp. In the TMP process, wood is chipped and then fed into large steam-heated refiners where the chips are squeezed and fibreized between two steel discs. In the groundwood process, debarked logs are fed into grinders where they are pressed against rotating stones and fibreized. Mechanical pulping does not remove the lignin, so the yield is very high, >95%, but also causes paper made from this pulp to yellow and become brittle over time. Mechanical pulps have rather short fibre lengths and produce weak paper. Although large amounts of electrical energy are required to produce mechanical pulp, it costs less than chemical pulp.

Paper recycling processes can use either chemical or mechanical pulp. By mixing with water and applying mechanical action the hydrogen bonds in the paper can be broken and fibres separated again. Most recycled paper contains a proportion of virgin fibre in the interests of quality.

There are three main classifications of recycled fibre:.

Besides the fibres, pulps may contain fillers such as chalk or china clay, which improve the characteristics of the paper for printing or writing. Additives for sizing purposes may be mixed into the pulp and/or applied to the paper web later in the manufacturing process. The purpose of sizing is to establish the correct level of surface absorbency to suit the ink or paint.

After the paper web is produced, the water must be removed from it by pressing and drying.

Pressing the sheet removes the water by force. Once the water is forced from the sheet, felt (not to be confused with the traditional felt) is used to collect the water. When making paper by hand, a blotter sheet is used.

Drying involves using air and or heat to remove water from the paper sheet. In the earliest days of papermaking this was done by hanging the paper sheets like laundry. In more modern times, various forms of heated drying mechanisms are used. On the paper machine, the most common is the steam-heated can dryer. These dryers can heat to temperatures above 200°F (93°C) and are used in long sequences of more than 40 cans. The heat produced by these can easily dry the paper to less than 6% moisture.

The paper may then undergo sizing to alter its physical properties for use in various applications.

Paper at this point is uncoated. Coated paper has a thin layer of material such as calcium carbonate or china clay applied to one or both sides in order to create a surface more suitable for high-resolution halftone screens. (Uncoated papers are rarely suitable for screens above 150 lpi.) Coated or uncoated papers may have their surfaces polished by calendering. Coated papers are divided into matte, semi-matte or silk, and gloss. Gloss papers give the highest optical density in the printed image.

The paper is then fed onto reels if it is to be used on web printing presses, or cut into sheets for other printing processes or other purposes. The fibres in the paper basically run in the machine direction. Sheets are usually cut "long-grain", i.e. with the grain parallel to the longer dimension of the sheet.

All paper produced by paper machines as the Fourdrinier machine are wove paper, i.e. the wire mesh that transports the web leaves a pattern that has the same density along the paper grain and across the grain. Textured finishes, watermarks and wire patterns imitating hand-made laid paper can be created by the use of appropriate rollers in the later stages of the machine.

Wove paper does not exhibit "laidlines", which are small regular lines left behind on paper when it was handmade in a mould made from rows of metal wires or bamboo. Laidlines are very close together. They run perpendicular to the "chainlines", which are further apart. Handmade paper similarly exhibits "deckle edges", or rough and feathery borders.[2]

Paper can be produced with a wide variety of properties, depending on its intended use.[3]

by transportation of the paper from the place where it is written or printed to the place where it is read: delivered by sender, transported by a third party (e.g. in the case of mail), or taken by the receiver
by writing at the same place as where it is read:
if sender and receiver are not there at the same time, in the case of a posted notice
if sender and receiver are both present, but use paper for illustration, or if communication by talking is not suitable:
because one is mute or the other is deaf
to avoid other people hearing it, because it is secret, or in order not to disturb them
in a noisy environment

Paper is often characterized by weight. In the United States, the weight assigned to a paper is the weight of a ream, 500 sheets, of varying "basic sizes", before the paper is cut into the size it is sold to end customers. For example, a ream of 20 lb, 8½ x 11" paper weighs 5 pounds, because it has been cut from a larger sheet into four pieces.[6] In the United States, printing paper is generally 20 lb, 24 lb, or 32 lb at most. Cover stock is generally 68 lb, and 110 lb or more is considered card stock.

The 8.5" x 11" size stems from the original size of a vat that was used to make paper.[citation needed] At the time, paper was made from passing a fiber and water slurry through a screen at the bottom of a box. The box was 17" deep and 44" wide. That sheet, folded in half in the long direction, then twice in the opposite direction, made a sheet of paper that was exactly 8.5" x 11".

In Europe, and other regions using the ISO 216 paper sizing system, the weight is expressed in grammes per square metre (g/m2 or usually just g) of the paper. Printing paper is generally between 60 g and 120 g. Anything heavier than 160 g is considered card. The weight of a ream therefore depends on the dimensions of the paper and its thickness.

The sizing system in Europe is based on common width to height ratios for different paper sizes. The largest standard size paper is A0 (A zero). Two sheets of A1, placed upright side by side fit exactly into one sheet of A0 laid on its side. Similarly, two sheets of A2 fit into one sheet of A1 and so forth. Common sizes used in the office and the home are A4 and A3 (A3 is the size of two A4 sheets).

The future of paper

With increasing environmental concerns about synthetic coatings (such as PFOA) and the higher prices of hydrocarbon based petrochemicals, there is a focus on zein (corn protein) as a coating for paper in high grease applications such as popcorn bags. [9]

Also, synthetics such as Tyvek and Teslin have been introduced as printing media as a more durable material than paper.

also referred to as: