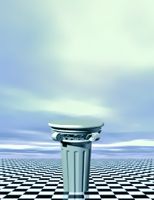 b : the base of an upright structure

Although in Syria, Asia Minor and Tunisia the Romans occasionally raised the columns of their temples or propylaea on square pedestals, in Rome itself they were employed only to give greater importance to isolated columns, such as those of Trajan and Antoninus, or as a podium to the columns employed decoratively in the Roman triumphal arches.

The architects of the Italian revival, however, conceived the idea that no order was complete without a pedestal, and as the orders were by them employed to divide up and decorate a building in several stories, the cornice of the pedestal was carried through and formed the sills of their windows, or, in open arcades, round a court, the balustrade of the arcade. They also would seem to have considered that the height of the pedestal should correspond in its proportion with that of the column or pilaster it supported; thus in the church of Saint John Lateran, where the applied order is of considerable dimensions, the pedestal is 13 feet (4.0 m) high instead of the ordinary height of 3 to 5 feet (1.5 m).

In the imperial China, a stone tortoise called bixi was traditionally used as the pedestal for important stele, especially those associated with emperors.[1] According to the 1396 version of the regulations issued by the Ming Dynasty founder, the Hongwu Emperor, the highest nobility (those of the gong and hou ranks) and the officials of the top 3 ranks were eligible for bixi-based funerary tablets, while lower-level mandarins' steles were to stand on simple rectangular pedestals.[2]

Use in Popular Culture

When a person overly idealizes someone (or something), it is often referred to as "putting one on a pedestal".