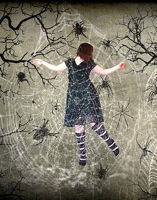 1: an exaggerated usually inexplicable and illogical fear of a particular object, class of objects, or situation

A phobia (from the Greek: φόβος, Phóbos], meaning "fear" or "morbid fear") is, when used in the context of clinical psychology, a type of anxiety disorder, usually defined as a persistent fear of an object or situation in which the sufferer commits to great lengths in avoiding, typically disproportional to the actual danger posed, often being recognized as irrational. In the event the phobia cannot be avoided entirely, the sufferer will endure the situation or object with marked distress and significant interference in social or occupational activities.

The terms distress and impairment as defined by the Diagnostic and Statistical Manual of Mental Disorders, Fourth Edition (DSM-IV-TR) should also take into account the context of the sufferer's environment if attempting a diagnosis. The DSM-IV-TR states that if a phobic stimulus, whether it be an object or a social situation, is absent entirely in an environment — a diagnosis cannot be made. An example of this situation would be an individual who has a fear of mice (Suriphobia) but lives in an area devoid of mice. Even though the concept of mice causes marked distress and impairment within the individual, because the individual does not encounter mice in the environment no actual distress or impairment is ever experienced. Proximity and the degree to which escape from the phobic stimulus is impossible should also be considered. As the sufferer approaches a phobic stimulus, anxiety levels increase (e.g. as one gets closer to a snake, fear increases in ophidiophobia), and the degree to which escape of the phobic stimulus is limited has the effect of varying the intensity of fear in instances such as riding an elevator (e.g. anxiety increases at the midway point between floors and decreases when the floor is reached and the doors open).

Finally, a point warranting clarification is that the term phobia is an encompassing term and when discussed is usually done in terms of specific phobias and social phobias. Specific phobias are nouns such as arachnophobia or acrophobia which, as the name implies, are specific, and social phobia are phobias within social situations such as public speaking and crowded areas.

Psychologists and psychiatrists classify most phobias into three categories and, according to the Diagnostic and Statistical Manual of Mental Disorders, Fourth Edition (DSM-IV), such phobias are considered to be sub-types of anxiety disorder. The three categories are:

3. Agoraphobia: a generalized fear of leaving home or a small familiar 'safe' area, and of possible panic attacks that might follow. It may also be caused by various specific phobias such as fear of open spaces, social embarrassment (social agoraphobia), fear of contamination (fear of germs, possibly complicated by obsessive-compulsive disorder) or PTSD (post traumatic stress disorder) related to a trauma that occurred out of doors.

Phobias vary in severity among individuals. Some individuals can simply avoid the subject of their fear and suffer relatively mild anxiety over that fear. Others suffer full-fledged panic attacks with all the associated disabling symptoms. Most individuals understand that they are suffering from an irrational fear, but they are powerless to override their initial panic reaction.[1]