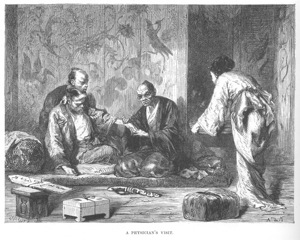 The word physician comes from the Ancient Greek word φύσις (physis) and its derived adjective physikos, meaning "nature" and "natural". From this, amongst other derivatives came the Vulgar Latin physicus, which meant a medical practitioner. After the Norman Conquest, the word entered Middle English, via Old French fisicien, as early as 1100. Originally, physician meant a practitioner of physic (pronounced with a hard C). This archaic noun had entered Middle English by 1300 (via Old French fisique). Physic meant the art or science of treatment with drugs or medications (as opposed to surgery), and was later used both as a verb and also to describe the medications themselves.

The term doctor (medical doctor) is older and shorter, but can be confused with holders of other academic doctorates (see doctor of medicine). Doctor (gen.: doctoris) means teacher in Latin and is an agent noun derived from the verb docere ('teach'). A cognate expression occurs in French as docteur médecin, a direct equivalent of medical doctor or doctor of medicine, and commonly found as its contraction, médecin (doctor, physician).

The Greek word ἰατρός (iatrós, doctor or healer) is often translated as physician. Ἱατρός is not preserved directly in English, but occurs in such formations as psychiatrist (translates from Greek as healer of the soul), podiatrist (foot healer), and iatrogenic disease (a disease caused by medical treatment). In Latin, the word medicus meant much what physician or doctor does now. Compare these translations of a well-known proverb (the nouns are in vocative case):

The ancient Romans also had the word archiater, for court physician. Archiater derives from the ancient Greek ἀρχιατρός (from ἄρχω + ἰατρός, chief healer). By contraction, this title has given modern German its word for physician: Arzt.

Leech and leechcraft are archaic English words respectively for doctor and medicine. The Old English word for "physician", læċe, which is related to Old High German lāhhi and Old Irish liaig, lives on as the modern English word leech, as these particular creatures were formerly much used by the medical profession. Cognate forms for leech exist in Scandinavian languages: in modern Swedish as läkare, in Danish as læge, in modern Norwegian as lege (bokmål) or lækjar (nynorsk), and in Finnish as lääkäri. These Scandinavian words still translate as doctor or physician rather than as a blood-sucking parasite.

A physician—also known as doctor of medicine, medical doctor, or simply doctor—practices the ancient profession of medicine, which is concerned with maintaining or restoring human health through the study, diagnosis, and treatment of disease or injury. This properly requires both a detailed knowledge of the academic disciplines (such as anatomy and physiology) underlying diseases and their treatment—the science of medicine—and also a decent competence in its applied practice—the art or craft of medicine.

Both the role of the physician and the meaning of the word itself vary significantly around the world, but as generally understood, the ethics of medicine require that physicians show consideration, compassion and benevolence for their patients.[1]

Life is short, and Art long;
the crisis fleeting; experience perilous, and decision difficult.
The physician must not only be prepared to do what is right himself,
but also to make the patient, the attendants, and externals cooperate.
—First aphorism of Hippocrates, c. 400 BCE, from the Hippocratic Corpus online (translated by Francis Adams)