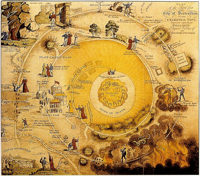 A pilgrim (lat. peregrinus) is one who undertakes a pilgrimage, literally 'far afield'. This is traditionally a visit to a place of some religious or historic significance; often a considerable distance is traveled. Examples include a Christian or Jew visiting Jerusalem or a Muslim visiting Mecca.

Pilgrims and the making of pilgrimages are common in many religions, including the faiths in ancient Egypt, Persia in the Mithraic period, India, China, and Japan. The Greek and Roman customs of consulting the gods at local oracles, such as those at Dodona or Delphi, both in Greece, are widely known. In Greece, pilgrimages could either be personal or state-sponsored.[1]

In the early period of Hebrew history, pilgrims traveled to Shiloh, Dan, Bethel, and eventually Jerusalem, a practice followed by other Abrahamic religions. The great Islamic pilgrimage to Mecca (now in Saudi Arabia), is obligatory for every able Muslim. Other Islamic devotional pilgrimages, particularly to the tombs of Shia Imams or Sufi saints, are numerous. The early Christians made pilgrimages to the scenes of the Passion of Christ in Jerusalem. After Jerusalem had been occupied by the Saracens, Christians secured the liberty of pilgrimage, on payment of a tax by treaty. Medieval military orders, such as the Knights Templar arose to protect the pilgrims on their journeys.

While religious pilgrims usually travel toward a specific destination, a physical location is not a necessity. One group of pilgrims in early Celtic Christianity were the Peregrinari Pro Christ, (Pilgrims for Christ), or "white martyrs". They left their homes to wander in the world.[2] This sort of pilgrimage was an ascetic religious practice, as the pilgrim left the security of home and the clan for an unknown destination, in complete trust of Divine Providence. These travels often resulted in the founding of new abbeys and spreading Christianity among the pagan population in Britain as well as in continental Europe.

A cultural pilgrimage, while also about personal journey, involves a secular response. Destinations for such pilgrims can include historic sites of national or cultural importance, and can be defined as places "of cultural significance: an artist's home, the location of a pivotal event or an iconic destination."[3] An example might be a baseball fan visiting Cooperstown, New York. Destinations for cultural pilgrims include examples such as Auschwitz concentration camp, Gettysburg Battlefield, the Ernest Hemingway House or even Disneyland.[3] Cultural pilgrims may also travel on religious pilgrimage routes, such as the Way of St. James, with the perspective of making it a historic or architectural tour rather than a religious experience.[4]

Secular pilgrims also exist under communist regimes. These devotional but strictly secular pilgrims visited locations such as the Mausoleum of Lenin or Mausoleum of Mao Zedong, or the Birthplace of Karl Marx. Such visits are sometimes state-sponsored.