From Nordan Symposia
(Redirected from Jerusalem)
Jump to navigationJump to search

The community of truth seekers presided over by Machiventa Melchizedek. Also, the ancient city of Palestine and the current capital of Israel; a holy city for Judaism (Temple of Solomon and the capital of the ancient kingdoms of Israel and Judeah), Christianity (Christ’s crucifixion and resurrection), and Islam (Muhammad’s ascension to heaven).

Although the precise origin of the Hebrew name for Jerusalem, Yerushalayim remains uncertain, scholars have come up with a variety of interpretations. Some say it means "legacy of peace" — a portmanteau of yerusha (legacy) and shalom (peace). "Shalom" is a cognate of the Hebrew name "Shlomo," i.e., King Solomon," the builder of the First Temple. Alternatively, the second part of the portmanteau could be Salem (Shalem literally "whole" or "in harmony"), an early name for Jerusalem (Jerusalem, by Amos Elon [1] ISBN 0006375316 HarperCollins Publishers Ltd) The epithet may have originated in the ancient name of Jerusalem—Salem (after the pagan deity of the city), which is etymologically connected in the Semitic languages with the words for peace (shalom in Hebrew, salam in Arabic) that appears in the Book of Genesis. (Fr. King James Version: "And Melchizedek king of Salem brought forth bread and wine: and he was the priest of the most high God." (Genesis 14:18) Others cite the Amarna letters, where the Akkadian name of the city appears as Urušalim, a cognate of the Hebrew Ir Shalem. Some believe there is a connection to Shalim, the beneficent deity known from Ugaritic myths as the personification of dusk.[2] enttitled Jerusalem, the Old City pub. Quds University.

A Midrashic interpretation in Genesis Rabba explains that Abraham came to the city that was then called Shalem after rescuing Lot. "sharing"[3] International De Documéntation Judéo-Chrétienne Sharing Jerusalem: The Spiritual And Political Challenges "I will share another meta-midrash...believers in the One Supreme God." Upon arrival, he asked the king and high priest Melchizedek to bless him, and Melchizedek did so in the name of God (indicating that he, like Abraham, was a monotheist). This encounter between Melchizedek and Abraham was commemorated by renaming the city in their honor: the name Yeru (derived from Yireh, the name Abraham gave to the Temple Mount) was combined with Shalem, "sharing" producing Yeru-Shalem, meaning the "city of Shalem," or "founded by Shalem." If shalem means "complete," or "without defect, " Yerushalayim would mean the "perfect city," or "the city of he who is perfect". Zechariah Sitchin, The Cosmic Code, Avon 1998. The ending -im indicates the plural in Hebrew grammar and -ayim the dual, leading to an interpretation of the name as representing two facets of the city, such as two hills. ISBN 0405102984 by Edwin Wallace Sherman entitled Jerusalem the Holy. A similar view was held by those who give the Hebrew dual to the word (see: Jerusalem: The Topography, Economics and History from the Earliest Times to A.D. 70 by George Adam Smith, pub. Hodder and Stoughton. "The termination -aim or -ayim used to be taken as the ordinary termination of the dual of nouns, and was explained as signifying the upper and lower citie." [4]. The pronunciation of the last syllable as -ayim appears to be a late development, which had not yet appeared at the time of the Septuagint. 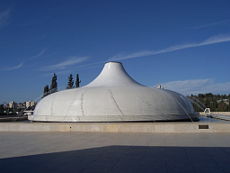 The Shrine of the Book, housing the Dead Sea Scrolls, at the Israel Museum

Although Jerusalem is known around the world for its religious significance, the city is also home to many artistic and cultural venues. The Israel Museum, Jerusalem's premier art museum, annually attracts nearly one million visitors, approximately one-third of them international tourists.[5] pub. The Israel Museum, Jerusalem. The twenty-acre museum complex comprises several buildings featuring special exhibits and extensive collections of Judaica, archeological findings, and Israeli and European art.

The Dead Sea scrolls, discovered in the mid-twentieth century in the Qumran caves near the Dead Sea, are housed in the Museum's Shrine of the Book.[6] pub. The Israel Museum, Jerusalem entitled Shrine of the Book The Youth Wing, which mounts changing exhibits and runs an extensive art education program, is visited by 100,000 children a year. The museum has a large outdoor sculpture garden, and a scale-model of the Second Temple was recently moved from the Holyland Hotel to a new location on the museum grounds. Other museums affiliated with the Israel Museum are the Rockefeller Archaeological Museum, Ticho House, and the Paley Center of Art.

Another prominent cultural institution in Jerusalem is Yad Vashem, Israel's national memorial to the victims of the Holocaust. Yad Vashem houses the world's largest [10] library of Holocaust-related information, with an estimated 100,000 books and articles.[11] The complex contains a state-of-the-art museum that explores the genocide of the Jews through exhibits that focus on the personal stories of individuals and families whose lives were torn asunder, and a gallery displaying permanent and changing exhibits of work by artists who died in the Holocaust. Another memorial at Yad Vashem commemorates the 1.5 million Jewish children who perished at the hands of the Nazis. Yad Vashem operates as both a research and educational institution.

One of the city's foremost orchestras is the Jerusalem Symphony Orchestra, which has been operating since the 1940s.[12] The Orchestra has held performances in cities around the world, including Vienna, Frankfurt, and New York City. Within walking distance of the Old City is a cultural district which includes the Khan Theatre, the only repertoire theater in the city,[13] and the Jerusalem Cinematheque. The Jerusalem Theater, located in the Komemiyut (Talbiya) neighborhood, hosts over 150 concerts a year, as well as theater and dance companies and performing artists from overseas.[14] Other prominent facilities for the performing arts include the International Convention Center (Binyanei HaUma) near the entrance to city, where the Israel Philharmonic Orchestra plays, the Gerard Behar Center in downtown Jerusalem, the Jerusalem Music Center in Yemin Moshe,[15] and the Targ Music Center in Ein Kerem. The Palestinian National Theatre, founded in 1984 and once the only center for art and culture in East Jerusalem,[16] today presents art from the Palestinian perspective.[17] The Israel Festival,[18] featuring local and international vocal artists, concerts, plays and street theater, has been held annually since 1961. For the past 25 years, Jerusalem has been the major organizer of this event, which takes place in May-June, and most of the performances take place at venues around the city.[19] The necessary information could be found by clicking the "About" link on the homepage that appears.

Jerusalem plays an important role in the three monotheistic religions — Judaism, Christianity, and Islam. The 2000 Statistical Yearbook of Jerusalem lists 1204 synagogues, 158 churches, and 73 mosques within the city.(Protecting Jerusalem's Holy Sites: A Strategy for Negotiating a Sacred Peace,Cambridge University Press ISBN 0521866626) Despite efforts to maintain peaceful religious coexistence, some sites, such as the Temple Mount, have been a continuous source of friction and controversy. 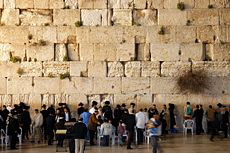 The Western Wall, one of the holiest sites in Judaism

Jerusalem has been sacred to the Jews since the 10th century BCE,as the site of Solomon's Temple and the Second Temple. It is mentioned in the Bible 632 times. Today, the Western Wall, a remnant of the Second Temple, is a holy site for Jews, second only to the Temple Mount itself.[20] Synagogues around the world are traditionally built with the Holy Ark facing Jerusalem,[21] and Arks within Jerusalem face the "Holy of Holies".[22] Returning: The Land of Israel as Focus in Jewish History. As prescribed in the Mishna and codified in the Shulchan Aruch, daily prayers are recited while facing towards Jerusalem and the Temple Mount. Many Jews have "Mizrach" plaques hung on a wall of their homes to indicate the direction of prayer. The Jewish injunction to pray toward Jerusalem comes in the Orach Chayim section of Shulchan Aruch (94:1) — "When one rises to pray anywhere in the Diaspora, he should face towards the Land of Israel, directing himself also toward Jerusalem, the Temple, and the Holy of Holies."

Christianity reveres Jerusalem not only for its role in the Old Testament but also for its significance in the life of Jesus. According to Biblical accounts, Jesus was brought to the city of Jerusalem not long after his birth. From the King James Version of the Bible: "And when the days of her purification according to the law of Moses were accomplished, they brought [Jesus] to Jerusalem, to present him to the Lord;" (Luke 2:22) and later in his life cleansed the Second Temple. From the King James Version of the Bible: "And they come to Jerusalem: and Jesus went into the temple, and began to cast out them that sold and bought in the temple, and overthrew the tables of the moneychangers, and the seats of them that sold doves;" (Mark 11:15) The Cenacle, believed to be the site of Jesus' Last Supper, is located on Mount Zion in the same building that houses the Tomb of King David.(Jerusalem in the Time of the Crusades ISBN 0415230004 "The interesting, if not reliable illustrations of the church on the round maps of Jerusalem show two distinct buildings on Mount Zion: the church of St Mary and the Cenacle (Chapel of the Last Supper) appear as separate buildings." (A Life of Jesus ISBN 0809123193)

Another prominent Christian site in Jerusalem is Golgotha, the site of the crucifixion. The Gospel of John describes it as being located outside Jerusalem,King James Version of the Bible: "This title then read many of the Jews: for the place where Jesus was crucified was nigh to the city: and it was written in Hebrew, and Greek, and Latin." (John 19:20) but recent archaeological evidence suggests Golgotha is a short distance from the Old City walls, within the present-day confines of the city.[23] The land currently occupied by the Church of the Holy Sepulchre is considered one of the top candidates for Golgotha and thus has been a Christian pilgrimage site for the past two thousand years.(St. John's Gospel: A Bible Study Guide and Commentary for Individuals and Groups ISBN 0898708214 Pilgrimage: Adventures of the Spirit, ISBN 1885211562 "The general consensus is that the Church of the Holy Sepulchre marks the hill called Golgotha, and that the site of the Crucifixion and the last five Stations of the Cross are located under its large black domes."

According to tradition, Jerusalem is the third-holiest city in Islam. Before it was permanently switched to the Kabaa in Mecca, the qibla (direction of prayer) for Muslims was Jerusalem.(The Israeli-Palestinian War: Escalating to NowhereISBN 0275987582) The city's lasting place in Islam, however, is primarily due to Muhammad's Night of Ascension (c. 620 CE). Muslims believe Muhammad was miraculously transported one night from Mecca to the Temple Mount in Jerusalem, whereupon he ascended to Heaven to meet previous prophets of Islam.(The Monotheists: The Peoples of God ISBN 0691114609 [24] The first verse in the Qur'an's Surat al-Isra notes the destination of Muhammad's journey as al-Aqsa (the farthest) mosque. "Who did take His servant for a Journey by night from the Sacred Mosque to the farthest Mosque, whose precincts We did bless,- in order that We might show him some of Our Signs: for He is the One Who heareth and seeth (all things)." (17:1) in reference to the location in Jerusalem.

Today, the Temple Mount is topped by two Islamic landmarks intended to commemorate the event — al-Aqsa Mosque, derived from the name mentioned in the Qur'an, and the Dome of the Rock, which stands over the Foundation Stone, from which Muslims believe Muhammad ascended to Heaven.[25]