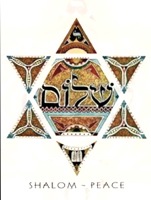 Shalom שָׁלוֹם is a Hebrew word meaning peace, hello, goodbye and wellbeing. As it does in English, it can refer to either peace between two entities (especially between man and God or between two countries), or to the well-being, welfare or safety of an individual or a group of individuals. It is also used as a greeting to either say hello or farewell, and is found in many other expressions and names. Its equivalent cognate in Arabic is salaam and sälam in Ethiopian Semitic languages.

The word shalom was derived from the name of the early Canaanite god Shalim, associated with early twilight (and hence the evening star). Shalim presided over peace. These attributes were later adapted into Roman Venus. Through this association, the Hebrew root shin-lamed-mem (ש.ל.ם), which has cognates in many Semitic languages, came to be connected with concepts of completeness, fulfilment, wellbeing and harmony. Hence usage of shalom in the Hebrew Bible often refers to conditions related to well-being: safety, health and prosperity of individuals and nations.

A thorough etymological analysis of the Hebrew roots and their derivatives reveal that 'Lom was the basic root word for Shalom and appears in other languages in similar forms. ("Theological Dictionary of the Old Testament", by Botterweck, Ringgren, and Fabry).

The word shalom is used in the world variety of expressions and contexts in Hebrew speech and writing: