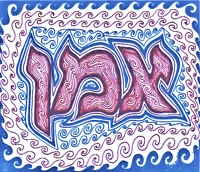 The word Amen (אָמֵן ; آمين, ’Āmīn ; "So be it; truly" is a declaration of affirmation [1] found in the Hebrew Bible and New Testament. Its use in Judaism dates back to its earliest texts. It has been generally adopted in Christian worship as a concluding word for prayers and hymns. In Islam, it is the standard ending to Dua (supplication). Common English translations of the word amen include: "Verily", "Truly", "So be it", and "Let it be." It can also be used colloquially to express strong agreement,[2] as in, for instance, amen to that.

Amen, meaning so be it, is of Hebrew origin [3] The word was imported into the Greek of the early Church from the Jewish synagogue.[4] From Greek, amen entered the other Western languages. According to a standard dictionary etymology, amen passed from Greek into Late Latin, and thence into English.[5]

The Hebrew word ’amen derives from the Hebrew verb ’aman, a primitive root.[6] Grammarians frequently list ’aman under its three consonants (’mn), which are identical to those of ’amen.This triliteral root (’mn) means to be firm, confirmed, reliable, faithful, have faith, believe. Two English words that derive from this root are:

b. Mammon, from Aramaic mamona, probably from Mishnaic Hebrew mamôn, probably from earlier *ma’mon (=? “security, deposit”).Both a and b derive from Hebrew ’aman (=to be firm).[7]

The Talmud teaches homiletically that the word Amen is an acronym for אל מלך נאמן (’El melekh ne’eman, "God, trustworthy King"), the phrase recited silently by an individual before reciting the Shma.

Popular among some theosophists and adherents of esoteric Christianity is the conjecture that amen is a derivative of the name of the Egyptian god Amun (which is sometimes also spelled Amen).[8] [9] [10] Some adherents of Eastern religions believe that amen shares roots with the Sanskrit word, aum. There is no academic support for either of these views.

Three distinct Biblical usages of amen may be noted:[1]

In the New Testament

There are 52 Amens in the Synoptic Gospels and 25 in John. The five final Amens (Matthew 6:13, 28:20, Mark 16:20, Luke 24:53 and John 21:25), which are wanting in the best manuscripts, simulate the effect of final amen in the Hebrew Psalms. All initial Amens occur in the sayings of Jesus. These initial Amens are unparalleled in Hebrew literature, according to Friedrich Delitzsch, because they do not refer to the words of a previous speaker but instead introduce a new thought.

Jewish law requires an individual to say Amen in a variety of contexts.

Liturgically, amen is a communal response to be recited at certain points during the prayer service. It is recited communally to affirm a blessing made by the prayer reader. It is also mandated as a response during the kaddish doxology.

The congregation is sometimes prompted to answer 'amen' by the terms ve-'imru (ואמרו) = "and [now] say (pl.)," or, ve-nomar (ונאמר) = "and let us say." Contemporary usage reflects ancient practice: As early as the 4th century BCE, Jews assembled in the Temple responded 'amen' at the close of a doxology or other prayer uttered by a priest. This Jewish liturgical use of amen was adopted by the Christians.[11], but Jewish law also requires individuals to answer amen whenever they hear a blessing recited, even in a non-liturgical setting.

Jews usually pronounce the word as it is pronounced in Hebrew: "aw-MÉN" (Ashkenazi) or "ah-MÉN" (Sephardi).

The use of "Amen" after a prayer or other statement in Christianity is not strictly orthodox. When used as an equivalent to an oath it can be seen to go against Jesus' own words: "Do not take an oath at all. ... Let what you say be simply yes or no" (Matt. 5:33-37).

The uses of amen ("verily") in the Gospels form a peculiar class; they are initial, but often lack any backward reference.[12] Jesus used the word to affirm his own utterances, not those of another person, and this usage was adopted by the church. The use of the initial amen, single or double in form, to introduce solemn statements of Jesus in the Gospels had no parallel in Jewish practice. [13] The liturgical use of the word in apostolic times is attested by the passage from 1 Corinthians cited above, and Justin Martyr (c. 150) describes the congregation as responding "amen," to the benediction after the celebration of the Eucharist. Its introduction into the baptismal formula (in the Greek Orthodox Church it is pronounced after the name of each person of the Trinity) is probably later. Among certain Gnostic sects Amen became the name of an angel.

In the King James Bible, the word amen is preserved in a number of contexts. Notable ones include:

In English, the word "amen" has two primary pronunciations, ah-men (aˈmɛn/) or ay-men (eɪˈmɛn/), with minor additional variation in emphasis (the two syllables may be equally stressed instead of placing primary stress on the second). The ah-men pronunciation is usual in British English, the one that is used in performances of classical music, in churches with more formalized rituals and liturgy and liberal Evangelical Protestant denominations. The ay-men pronunciation, a product of the Great Vowel Shift dating to the 15th century, is associated with Irish Protestantism and conservative evangelical Christian denominations generally, and the pronunciation that is typically sung in gospel music. Increasingly Anglophone Roman Catholics are adopting the "ay-men" pronunciation for speech, although the broad "ah" is usually retained for singing.

Muslims use the word "’Āmīn" (آمين) not only after reciting the first surah (Al Fatiha) of the Qur'an, but also when concluding a prayer or dua, with the same meaning as in Christianity.[14] The Islamic use of the word is the same as the Jewish use of the word. Sunni Muslims use amen in prayers -after (Surat Al Fatiha) - but the Shia Muslims says that it is haram to say it in the prayers, while it can be used in duas.

Amen also has an equivalent in Hinduism, "astu", which is referred at end of prayers or teachings, and means "so be it". The use of the word is similar to usages in other religions. "Tatha-astu" is used to bless someone meaning "tath" "astu" - Be It...