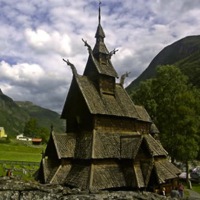 a : the whole body of Christians
b : denomination <the Presbyterian church>
c : congregation

For lessons on the related topic of Tradition, follow this link.

The church classification describes religions that are all-embracing of religious expression in a society. Religions of this type are the guardians of religion for all members of the societies in which they are located and tolerate no religious competition. They also strive to provide an all-encompassing worldview for their adherents and are typically enmeshed with the political and economic structures of society.

claim universality, include all members of the society within their ranks, and have a strong tendency to equate "citizenship" with "membership"

exercise religious monopoly and try to eliminate religious competition are very closely allied with the state and secular powers–frequently there is overlapping of responsibilities and much mutual reinforcement are extensively organized as a hierarchical bureaucratic institution with a complex division of labor employ professional, full-time clergy who possess the appropriate credentials of education and formal ordination primarily gain new members through natural reproduction and the socialization of children into the ranks

allow for diversity by creating different groups within the church (e.g., orders of nuns or monks) rather than through the formation of new religions

The classical example of a church by this definition is the Roman Catholic Church, especially in the past, such as the State church of the Roman Empire. Today, the Roman Catholic Church has been forced into the denomination category because of religious pluralism, or competition among religions. This is especially true of Catholicism in the United States. The change from a church to a denomination is still under way in many Latin American countries where the majority of citizens remain Catholics.

Islam is a church in the strongest sense in most Middle Eastern countries (especially Saudi Arabia), where there is no separation of church and state. The Basic Law of Saudi Arabia states: "[The Constitution of Saudi Arabia is] God's Book [the Qur'an] and the Sunnah of His Prophet [[[Muhammad]]]". These nations are ruled under a strict interpretation of religious law (a Salafi interpretation of shari'a in the case of KSA) with no equivalent secular legal system, or with religious law predominating, and never less than equal to secular law. Of all of Johnstone's criteria for a church, Islam is lacking only an ordained clergy and a strictly hierarchical structure, but has a form of clergy and hierarchy in the ulema. In the Shi'a sects, there is a professional clergy led by a Grand Ayatollah.[1]