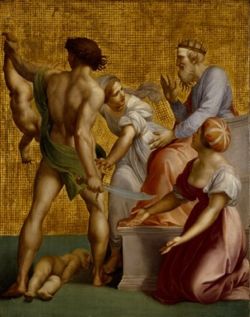 King Solomon (Hebrew: שְׁלֹמֹה, Standard Šəlomo or Šlomo Tiberian Šəlōmōh; Arabic: سليمان, Sulayman; all essentially meaning "peace") is a figure described in Middle Eastern scriptures as a wise ruler of an empire centred on the united Kingdom of Israel. Legends say he was born in Jerusalem about 1000 BC and reigned over Israel from about 970 to 928 BC.

The scriptural accounts identify Solomon as the son of David. He is also called Jedidiah in the Tanakh (Old Testament), and is described as the third king of the United Monarchy, and the final king before the northern Kingdom of Israel and the southern Kingdom of Judah split; following the split his patrilineal descendants ruled over Judah alone.

The Bible accredits Solomon as the builder of the First Temple of the Lord in Jerusalem. The Bible portrays Solomon as great in wisdom, wealth, and power. Solomon is the subject of many other later legends.[1]

Though the Hellenized Jewish beliefs were very little influenced by the teachings of the Epicureans, they were very materially affected by the philosophy of Plato and the self-abnegation doctrines of the Stoics. The great inroad of Stoicism is exemplified by the Fourth Book of the Maccabees; the penetration of both Platonic philosophy and Stoic doctrines is exhibited in the Wisdom of Solomon. [2]