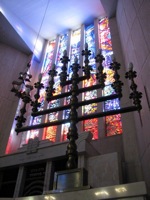 Middle English synagoge, from Anglo-French, from Late Latin synagoga, from Greek synagōgē assembly, synagogue, from synagein to bring together, from syn- + agein to lead — more at agent 13th Century

Synagogues have a large hall for prayer (the main sanctuary), and can also have smaller rooms for study and sometimes a social hall and offices. Some have a separate room for Torah study, called the beth midrash—בית מדרש ("House of Study").

Synagogues are consecrated spaces that can be used only for the purpose of prayer, however a synagogue is not necessary for worship. Communal Jewish worship can be carried out wherever ten Jews (a minyan) assemble. Worship can also be carried out alone or with fewer than ten people assembled together. However there are certain prayers that are communal prayers and therefore can be recited only by a minyan. The synagogue does not replace the long-since destroyed Temple in Jerusalem.

Israelis use the Hebrew term bet knesset (assembly house). Jews of Ashkenazi descent have traditionally used the Yiddish term "shul" (cognate with the German Schule, school) in everyday speech. Spanish and Portuguese Jews call the synagogue an esnoga. Persian Jews and Karaite Jews use the term Kenesa, which is derived from Aramaic, and some Arabic-speaking Jews use knis. Some Reform and Conservative Jews use the word "temple". The Greek word "Synagogue" is a good all-around term, used in English (and German and French), to cover the preceding possibilities.[1]