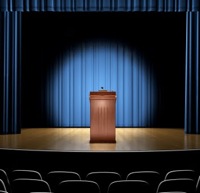 a : one around the arena of an ancient amphitheater serving as a base for the tiers of seats
b : the masonry under the stylobate of a temple

A podium (plural podia) is a platform that is used to raise something to a short distance above its surroundings. It derives from the Greek πόδι (foot). In architecture a building can rest on a large podium. Podia can also be used to raise people, for instance the conductor of an orchestra stands on a podium as do many public speakers. Podium has also come to mean the object a speaker stands behind and sets papers or books upon even when it is at floor level, though the traditional term for that item is lectern. The terms are not identical; one typically stands on a podium, but one typically stands behind a lectern.

In sports, a type of podium is used to honor the top three competitors in events such as the Olympics. In the Olympics a three level podium is used, the highest level in the centre holds the gold medalist, to their right is a somewhat lower one for the silver medalist. To the left of the gold medalist is an even lower platform for the bronze medalist. In many sports, results in the top three of a competition are often referred to as podiums, or podium finishes. In some individual sports, "podiums" is an official statistic, referring to the number of top three results an athlete has achieved over the course of a season or career.