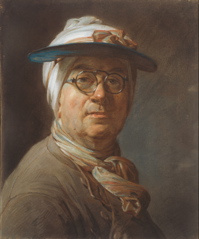 Middle French, from past participle of portraire

A portrait is a painting, photograph, sculpture, or other artistic representation of a person, in which the face and its expression is predominant. The intent is to display the likeness, personality, and even the mood of the person. For this reason, in photography a portrait is generally not a snapshot, but a composed image of a person in a still position. A portrait often shows a person looking directly at the painter or photographer, in order to most successfully engage the subject with the viewer.

When the artist creates a portrait of him- or herself, it is called a self-portrait. Identifiable examples become numerous in the late Middle Ages, but if the definition is extended the first was by the Egyptian Pharaoh Akhenaten's sculptor Bak, who carved a representation of himself and his wife Taheri c. 1365 BC. However, it seems likely that self-portraits go back to the cave paintings, the earliest representational art, and literature records several classical examples that are now lost.

In literature the term portrait refers to a written description or analysis of a person or thing. A written portrait often gives deep insight, and offers an analysis that goes far beyond the superficial. For example, American author Patricia Cornwell wrote a best-selling book titled Portrait of a Killer about the personality, background, and possible motivations of Jack the Ripper, as well as the media coverage of his murders, and the subsequent police investigation of his crimes.