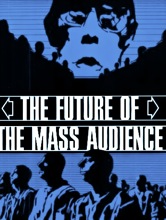 Mass media is a term used to denote a section of the media specifically envisioned and designed to reach a very large audience such as the population of a nation state. It was coined in the 1920s with the advent of nationwide radio networks, mass-circulation newspapers and magazines, although mass media (like books and manuscripts) were present centuries before the term became common. The term public media has a similar meaning: it is the sum of the public mass distributors of news and entertainment across media such as newspapers, television, radio, broadcasting, which may require union membership in some large markets such as Newspaper Guild, AFTRA, & text publishers. The concept of mass media is complicated in some internet media as now individuals have a means of potential exposure on a scale comparable to what was previously restricted to select group of mass media producers. These internet media may include:

The communications audience has been viewed by some commentators as forming a mass society with special characteristics, notably atomization or lack of social connections, which render it especially susceptible to the influence of modern mass-media techniques such as advertising and propaganda. The term "MSM" or "mainstream media" has been widely used in the blogosphere in discussion of the mass media and media bias.

Types of drama in numerous cultures were probably the first mass-media, going back into the Ancient World. The first dated printed book known is the "Diamond Sutra", printed in China in 868 AD, although it is clear that books were printed earlier. Movable clay type was invented in 1041 in China. However, due to the slow spread of literacy to the masses in China, and the relatively high cost of paper there, the earliest printed mass-medium was probably European popular prints from about 1400. Although these were produced in huge numbers, very few early examples survive, and even most known to be printed before about 1600 have not survived. Johannes Gutenberg printed the first book on a printing press with movable type in 1453. This invention transformed the way the world received printed materials, although books remained too expensive really to be called a mass-medium for at least a century after that.

Newspapers developed around from 1612, with the first example in English in 1620 [1] ; but they took until the nineteenth century to reach a mass-audience directly.

Mass media had the economics of linear replication: a single work could make money proportional to the number of copies sold, and as volumes went up, units costs went down, increasing profit margins further. Vast fortunes were to be made in mass media. In a democratic society, independent media serve to educate the public/electorate about issues regarding government and corporate entities. Some consider the concentration of media ownership to be a grave threat to democracy.

Mass media can be used for various purposes:

Another description of Mass Media is central media which implies:

This view of central media can be contrasted with lateral media, such as email networks, where messages are all slightly different and spread by a process of lateral diffusion.

Journalism is the discipline of collecting, analyzing, verifying and presenting information regarding current events, trends, issues and people. Those who practice journalism are known as journalists.

News-oriented journalism is sometimes described as the "first rough draft of history" (attributed to Phil Graham), because journalists often record important events, producing news articles on short deadlines. While under pressure to be first with their stories, news media organizations usually edit and proofread their reports prior to publication, adhering to each organization's standards of accuracy, quality and style. Many news organizations claim proud traditions of holding government officials and institutions accountable to the public, while media critics have raised questions about holding the press itself accountable.

Public relations is the art and science of managing communication between an organization and its key publics to build, manage and sustain its positive image. Examples include:

Electronic media and print media include:

Sound recording and reproduction is the electrical or mechanical re-creation and/or amplification of sound, often as music. This involves the use of audio equipment such as microphones, recording devices and loudspeakers. From early beginnings with the invention of the phonograph using purely mechanical techniques, the field has advanced with the invention of electrical recording, the mass production of the 78 record, the magnetic wire recorder followed by the tape recorder, the vinyl LP record. The invention of the compact cassette in the 1960s, followed by Sony's Walkman, gave a major boost to the mass distribution of music recordings, and the invention of digital recording and the compact disc in 1983 brought massive improvements in ruggedness and quality. The most recent developments have been in digital audio players.

An album is a collection of related audio recordings, released together to the public, usually commercially.

The term record album originated from the fact that 78 RPM Phonograph disc records were kept together in a book resembling a photo album. The first collection of records to be called an "album" was Tchaikovsky's Nutcracker Suite, release in April 1909 as a four-disc set by Odeon records. Technology History[3] It retailed for 16 shillings; about Pound sterling|£15 in modern currency.

A music video (also promo) is a short film or video that accompanies a complete piece of music, most commonly a song. Modern music videos were primarily made and used as a marketing device intended to promote the sale of music recordings. Although the origins of music videos go back much further, they came into their own in the 1980s, when Music Television's format was based around them. In the 1980s, the term "rock video" was often used to describe this form of entertainment, although the term has fallen into disuse.

The sequencing of content in a broadcast is called a schedule. With all technological endeavours, a number of technical terms and slang are developed.

Television and radio programs are distributed through radio broadcasting over frequency bands that are highly regulated by the Federal Communications Commission. Such regulation includes determination of the width of the bands, range, licensing, types of receivers and transmitters used, and acceptable content.

Cable programs are often broadcast simultaneously with radio and television programs, but have a more limited audience. By coding signals and having decoding equipment in homes, cable also enables subscription-based channels and pay-per-view services.

A broadcasting organisation may broadcast several programs at the same time, through several channels (frequencies), for example BBC One and Two. On the other hand, two or more organisations may share a channel and each use it during a fixed part of the day. Digital radio and digital television may also transmit multiplexed programming, with several channels compressed into one ensemble.

When broadcasting is done via the Internet the term webcasting is often used. In 2004 a new phenomenon occurred when a number of technologies combined to produce podcasting. Podcasting is an asynchronous broadcast/narrowcast medium, with one of the main proponents being Adam Curry and his associates the Podshow.

Film is a term that encompasses motion pictures as individual projects, as well as the field in general. The origin of the name comes from the fact that photographic film (also called filmstock) has historically been the primary medium for recording and displaying motion pictures. Many other terms exist — motion pictures (or just pictures and "picture"), the silver screen, photoplays, the cinema, picture shows, flicks — and commonly movies.

Films are produced by recording people and objects with cameras, or by creating them using animation techniques and/or special effects. They comprise a series of individual frames, but when these images are shown rapidly in succession, the illusion of motion is given to the viewer. Flickering between frames is not seen due to an effect known as persistence of vision — whereby the eye retains a visual image for a fraction of a second after the source has been removed. Also of relevance is what causes the perception of motion; a psychological effect identified as beta movement.

Film is considered by many to be an important art form; films entertain, educate, enlighten and inspire audiences. Any film can become a worldwide attraction, especially with the addition of dubbing or subtitles that translate the film message. Films are also artifacts created by specific cultures, which reflect those cultures, and, in turn, affect them.

The Internet (also known simply as "the Net" or "the Web") can be briefly understood as "a network of networks". Specifically, it is the worldwide, publicly accessible network of interconnected computer networks that transmit data by packet switching using the standard Internet Protocol (IP). It consists of millions of smaller domestic, academic, business, and governmental networks, which together carry various information and services, such as electronic mail, online chat, file transfer, and the interlinked Web pages and other documents of the World Wide Web.

Contrary to some common usage, the Internet and the World Wide Web are not synonymous: the Internet is the system of interconnected computer networks, linked by copper wires, fiber-optic cables, wireless connections etc.; the Web is the contents, or the interconnected documents, linked by hyperlinks and URLs. The World Wide Web is accessible through the Internet, along with many other services including e-mail, file sharing and others described below.

Toward the end of the 20th century, the advent of the World Wide Web marked the first era in which any individual could have a means of exposure on a scale comparable to that of mass media. For the first time, anyone with a web site can address a global audience, although serving to high levels of web traffic is still relatively expensive. It is possible that the rise of peer-to-peer technologies may have begun the process of making the cost of bandwidth manageable. Although a vast amount of information, imagery, and commentary (i.e. "content") has been made available, it is often difficult to determine the authenticity and reliability of information contained in web pages (in many cases, self-published). The invention of the Internet has also allowed breaking news stories to reach around the globe within minutes. This rapid growth of instantaneous, decentralized communication is often deemed likely to change mass media and its relationship to society.

"Cross-media" means the idea of distributing the same message through different media channels. A similar idea is expressed in the news industry as "convergence". Many authors understand cross-media publishing to be the ability to publish in both print and on the web without manual conversion effort. An increasing number of wireless devices with mutually incompatible data and screen formats make it even more difficult to achieve the objective “create once, publish many”.

The internet is quickly becoming the center of mass media. Everything is becoming accessible via the internet. Instead of picking up a newspaper, or watching the 10 o'clock news, people will log onto the internet to get the news they want, when they want it. Many workers listen to the radio through the internet while sitting at their desk. Games are played through the internet. The Internet and Education: Findings of the Pew Internet & American Life Project [4] Even the education system relies on the internet.Teachers can contact the entire class by sending one e-mail. They have web pages where students can get another copy of the class outline or assignments. Some classes even have class blogs where students must post weekly, and are graded on their contributions. The internet thus far has become an extremely dominant form of media.[5]