From Nordan Symposia
(Redirected from Preaching)
Jump to navigationJump to search 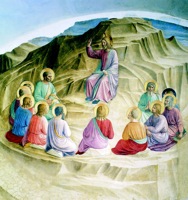 Middle English, from Anglo-French sermun, from Medieval Latin sermon-, sermo, from Latin, speech, conversation, from serere to link together

A sermon is an oration by a prophet or member of the clergy. Sermons address a Biblical, theological, religious, or moral topic, usually expounding on a type of belief, law or behavior within both past and present contexts. Elements of preaching include exposition, exhortation and practical application.

In Christianity, a sermon (also known as a homily within some churches) is often delivered in a place of worship, most of which have a pulpit or ambo, an elevated architectural feature. The word "sermon" comes from a Middle English word which was derived from an Old French term, which in turn came from the Latin word sermō; ("discourse") Although, links have been made between the Latin word serere, which means 'to join together', so this leaves the modern Latin definition open to interpretation . The word can mean "conversation", which could mean that early sermons were delivered in the form of question and answer, and that only later did it come to mean a monologue. In contrast to this, is the examples from the Bible, where sermons are speeches without interlocution: Moses' sermon in Deuteronomy 1-33; Jesus' sermon on the mount in Matthew 5-7; Peter's sermon after Pentecost in Acts 2:14-40.

In modern language, the word "sermon" can also be used pejoratively in secular terms to describe a lengthy or tedious speech delivered with great passion, by any person, to an uninterested audience. A sermonette is a short sermon (usually associated with television broadcasting, as stations would present a sermonette before signing off for the night).[1]