From Nordan Symposia
(Redirected from Propels)
Jump to navigationJump to search 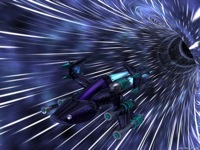 [Middle English propellen, from Latin propellere, from pro- before + pellere to drive — more at felt

Air propulsion is the act of moving an object through the air. The most common types are propeller, jet engine, turboprop, ramjet, rocket propulsion, and, experimentally, scramjet, pulse jet, and pulse detonation engine. Animals such as birds and insects obtain propulsion by flapping their wings.

The word is derived from two Latin words: pro meaning before or forwards and pellere meaning to drive. Propulsion means to push forward or drive an object forward. A propulsion system is a machine that produces thrust to push an object forward. On airplanes, thrust is usually generated through some application of Newton's third law of action and reaction. A gas, or working fluid, is accelerated by the engine, and the reaction to this acceleration produces a force on the engine. A general derivation of the thrust equation shows that the amount of thrust generated depends on the mass flow through the engine and the exit velocity of the gas. Different propulsion systems generate thrust in slightly different ways.

Some aircraft, like airliners and cargo planes, spend most of their life in a cruise condition. For these airplanes, excess thrust is not as important as high engine efficiency and low fuel usage. Since thrust depends on both the amount of gas moved and the velocity, we can generate high thrust by accelerating a large mass of gas by a small amount, or by accelerating a small mass of gas by a large amount. Because of the aerodynamic efficiency of propellers and fans, it is more fuel efficient to accelerate a large mass by a small amount. That is why we find high bypass fans and turboprops on cargo planes and airliners.

Some aircraft, like fighter planes or experimental high speed aircraft, require very high excess thrust to accelerate quickly and to overcome the high drag associated with high speeds. For these airplanes, engine efficiency is not as important as very high thrust. Modern military aircraft typically employ afterburners on a low bypass turbofan core. Future hypersonic aircraft will employ some type of ramjet or rocket propulsion.