From Nordan Symposia
(Redirected from Proselytization)
Jump to navigationJump to search 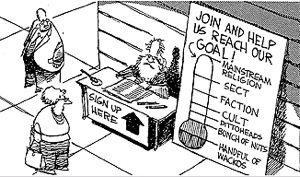 Hellenistic Greek προσήλυτος person who has come to a place, stranger, sojourner, convert to Judaism < ancient Greek προσηλυθ- , aorist stem of προσέρχεσθαι to come to, approach

Views on the propriety of different types of proselytism differ radically. Some feel that freedom of speech should have no limits and that virtually anyone, anywhere should have the right to talk about anything they see fit. Others see all sorts of proselytism as a nuisance and an intrusion and would like to see them restricted (either completely or to a limited arena). Thus, Prof. Natan Lerner of Tel Aviv University observes that the issue is one of a clash of rights—the perceived right of a person to express his or her views versus the perceived right of a person not to be exposed to views that he or she does not wish to hear.

Some don't mind preaching but are concerned if the speech is accompanied by physical benefits (e.g., a soup kitchen that provides food, but only under the condition that the recipients listen to an evangelical discourse) or new converts are given physical benefits not available to those who don't convert. Others are concerned if the preaching is aimed at children without the knowledge and consent of the parents.[1]