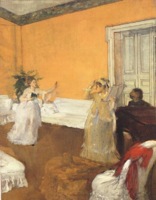 (b) In Psychol., the intentional repetition (mentally or verbally) of information in order to keep it temporarily in the memory.
b. A recital in a legal document. Obs. rare

b. in rehearsal, in process of being rehearsed.

For lessons on the topic of Rehearsal, follow this link.

A rehearsal is a preparatory event in music and theatre (and in other contexts) that is performed before the official public performance, as a form of practice, and to ensure that all details of the performance are adequate for professional presentation.

Rehearsal in theatre or opera house

In theatre, a performing arts ensemble rehearses a work in preparation for performance before an audience. Rehearsals that occur early in the production process are sometimes referred to as run-through's. Typically a run-through does not contain many of the technical aspects of a performance, and is primarily used to assist performers in learning dialogue and to solidify aspects of blocking.

A Q-2-Q or cue to cue is a type of technical rehearsal and is intended primarily for the technicians involved in a performance, although they are of great value to the entire ensemble. It is intended to allow the technicians and stage manager to rehearse the technical aspects of a performance and identify and resolve glitches. Performers do not typically rehearse entire scenes during Q-2-Q's, but instead only perform dialogue or actions that are used by the stage manager as a marker for when to initiate technical sequences or cues (hence the title). Abbreviated Q-2-Q's in which only the opening and closing sequences of each act or scene are performed is sometimes referred to as top's and tails. It is rare for any but the most technically complex performances to have Q-2-Q rehearsals outside of technical week. Cue to cues are often preceded by a dry tech, in which the technicians rehearse their cues without the actual performers present at the rehearsal.

A preview, although technically a performance as there is a full audience; including individuals who have paid for admission, is arguably also a rehearsal in as far as it is not uncommon in complex performances for the production to stop, or even return to an earlier point in the performance if there are unavoidable or unresolvable problems.

Rehearsing a musical composition often involves repeating some passages over and over again until everyone in the ensemble masters them. Rehearsal letters can be very helpful for this purpose. Orchestras often have section rehearsals or sectionals in which a section of the orchestra (e.g., the woodwind players) rehearse on their own. Prior to rehearsing a concerto with an orchestra, a soloist will often rehearse it with a pianist substituting for the entire orchestra (thus, two pianists in the case of piano concerti). To help with tempo in solo or chamber rehearsals, a metronome may be used. For music performances, a dress rehearsal does not imply dressing in performance concert dress. It is merely a final rehearsal before performance where generally the ensemble will run through the entire program as if there is an audience.

Rehearsal in other contexts

The use of rehearsals and dress rehearsals extends beyond the performing arts. The introduction of major changes to complex industrial and technical fields, such as information systems is often rehearsed, particularly where this requires multiple activities to be coordinated and completed within time constraints. Many companies undertook major initiatives to rehearse the changes associated with the Year 2000 problem and the economic and monetary union of the European Union.