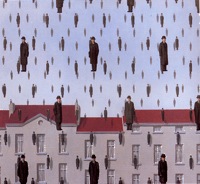 Middle English repeten, from Middle French & Latin; Middle French repeter, from Old French, from Latin repetere to return to, repeat, from re- + petere to go to, seek

b : to say over from memory : recite
c : to say after another

b : to make appear again <the curtains repeat the wallpaper pattern> <will repeat the program tomorrow>
c : to go through or experience again <had to repeat third grade>

Repetition is important in music, where sounds or sequences are often repeated. One often stated idea is that repetition should be in balance with the initial statements and variations in a piece. It may be called restatement, such as the restatement of a theme. While it plays a role in all music, in fact most musical sounds are periodic, it is especially prominent in specific styles. A literal repetition of a musical passage is often indicated by the use of a repeat sign, or the instructions da capo or dal segno.

Theodor Adorno criticized repetition and popular music as being psychotic and infantile. In contrast, Richard Middleton (1990) argues that "while repetition is a feature of all music, of any sort, a high level of repetition may be a specific mark of 'the popular'" and that this allows an, "enabling" of "an inclusive rather than exclusive audience" (p.139). "There is no universal norm or convention" for the amount or type of repetition, "all music contains repetition - but in differing amounts and of an enormous variety of types." This is influenced by "the political economy of production; the 'psychic economy' of individuals; the musico-technological media of production and reproduction (oral, written, electric); and the weight of the syntactic conventions of music-historical traditions" .

At the tone level, repetition creates a drone.