From Nordan Symposia
(Redirected from Resonate)
Jump to navigationJump to search 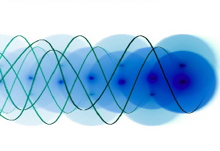 Resonance was discovered by Galileo Galilei with his investigations of pendulums beginning in 1602.

For lessons on the topic of Resonance, follow this link.

One familiar example is a playground swing, which acts as a pendulum. Pushing a person in a swing in time with the natural interval of the swing (its resonance frequency) will make the swing go higher and higher (maximum amplitude), while attempts to push the swing at a faster or slower tempo will result in smaller arcs. This is because the energy the swing absorbs is maximized when the pushes are 'in phase' with the swing's oscillations, while some of the swing's energy is actually extracted by the opposing force of the pushes when they are not.

Resonance occurs widely in nature, and is exploited in many man-made devices. It is the mechanism by which virtually all sinusoidal waves and vibrations are generated. Many sounds we hear, such as when hard objects of metal, glass, or wood are struck, are caused by brief resonant vibrations in the object. Light and other short wavelength electromagnetic radiation is produced by resonance on an atomic scale, such as electrons in atoms. Other examples are: