From Nordan Symposia
(Redirected from Revolutionary)
Jump to navigationJump to search 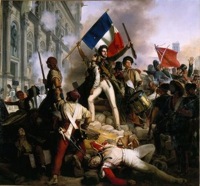 A revolution (from the Latin revolutio, "a turn around") is a fundamental change in power or organizational structures that takes place in a relatively short period of time. Aristotle described two types of political revolution:

Revolutions have occurred through human history and vary widely in terms of methods, duration, and motivating ideology. Their results include major changes in culture, economy, and socio-political institutions.

Scholarly debates about what does and does not constitute a revolution center around several issues. Early studies of revolutions primarily analyzed events in European history from a psychological perspective, but more modern examinations include global events and incorporate perspectives from several social sciences, including sociology and political science. Several generations of scholarly thought on revolutions have generated many competing theories and contributed much to the current understanding of this complex phenomenon.[1]