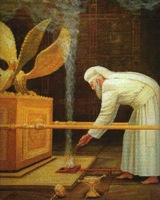 Many scholars have claimed that etymology of the Hebrew word for the Sadducees, צדוקים‎‎, points to a direct connection between the Sadducees and the House of Zadok, the high Priest under Solomon. Regardless of whether this is true or not, their name, meaning "righteous", is nonetheless indicative of their priestly and aristocratic characteristics.

The Sadducees (Hebrew: צדוקים‎‎ Tzedukim) were a sect or group of Jews that were active in Ancient Israel during the Second Temple period, starting from the 2nd century BC through the destruction of the Temple in 70 AD. The sect was identified by Josephus with the upper social and economic echelon of Judean society, and may have been comprised originally of members of the priestly clan. As a whole, the sect fulfilled various political, social and religious roles, including maintaining the Temple. The Sadducees are often compared to other contemporaneous sects, including the Pharisees, the Essenes, and the Early Christian movement. Their sect is believed to have become extinct sometime after the destruction of Herod's Temple in Jerusalem in 70 AD, but it has been speculated that later Karaites may have had some roots or connections with old Sadducee views.[1]