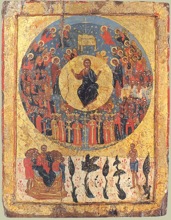 In most Christian theologies, the Second Coming of Christ is the anticipated return of Jesus from Heaven to earth, an event to fulfill aspects of Messianic prophecy, such as the general resurrection of the dead, the Last Judgment of the dead and the living and the full establishment of the Kingdom of God on Earth (also called the "Reign of God"), including the Messianic Age. Views about the nature of this return vary among Christian denominations with some Christians (such as Full Preterists) claiming it has already taken place.

For lessons on the topic of the Second Coming, follow this link.

The original Greek of the New Testament uses the term parousia (παρουσία from the Greek literal meaning of parousia: presence or arrival, derived from 'para-': beside, beyond, and 'ousia': substance) the "appearance and subsequent presence with" (in the ancient world referring to official visits by royalty). The Second Coming is also referred to as the Second Advent, from the Latin term "adventus," for "coming." Teachings about the last days comprise Christian eschatology.[1]