From Nordan Symposia
(Redirected from Segregated)
Jump to navigationJump to search 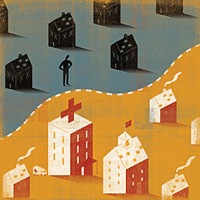 a. The separation or isolation of a portion of a community or a body of persons from the rest.
b. Dispersion, break up (of a collective unity).
c. The separation of a portion or portions of a collective or complex unity from the rest; the isolation of particular constituents of a compound or mixture.
d. spec. Separation from a church or ecclesiastical organization: chiefly in reproachful sense, schism.
e. Genetics. The separation of pairs of homologous alleles or chromosomes, esp. as occurs at meiosis in the formation of gametes by a heterozygous organism, to whose progeny different traits may consequently be transmitted.
f. The enforced separation of different racial groups in a country, community, or institution. Cf. APARTHEID.
g. The isolation or separate confinement of dangerous or troublesome prisoners. Hence (also segregation unit) a part of a prison designated for this purpose.

Racial segregation is the separation of different racial groups in daily life. It may apply to activities such as eating in a restaurant, drinking from a water fountain, using a washroom, attending school, going to the movies, or in the rental or purchase of a home. Segregation is generally outlawed, but may exist through social norms. Segregation may be maintained by means ranging from discrimination in hiring and in the rental and sale of housing to certain races to vigilante violence (such as lynchings, e.g.) Generally, a situation that arises when members of different races mutually prefer to associate and do business with members of their own race would usually be described as separation or de facto separation of the races rather than segregation. In the United States, legal segregation was required in some states and came with "anti-miscegenation laws" (prohibitions against interracial marriage). There were laws passed against segregation in the USA in the 1960s.

Segregation, however, often allowed close contact in hierarchical situations, such as allowing a person of one race to work as a servant for a member of another race. Segregation can involve spatial separation of the races, and/or mandatory use of different institutions, such as schools and hospitals by people of different races.[1]